Mohamed Salah was grappled inside the area but the theatric nature of his fall saw Neil Warnock compare to British Olympic bronze medallist diver Tom Daley. 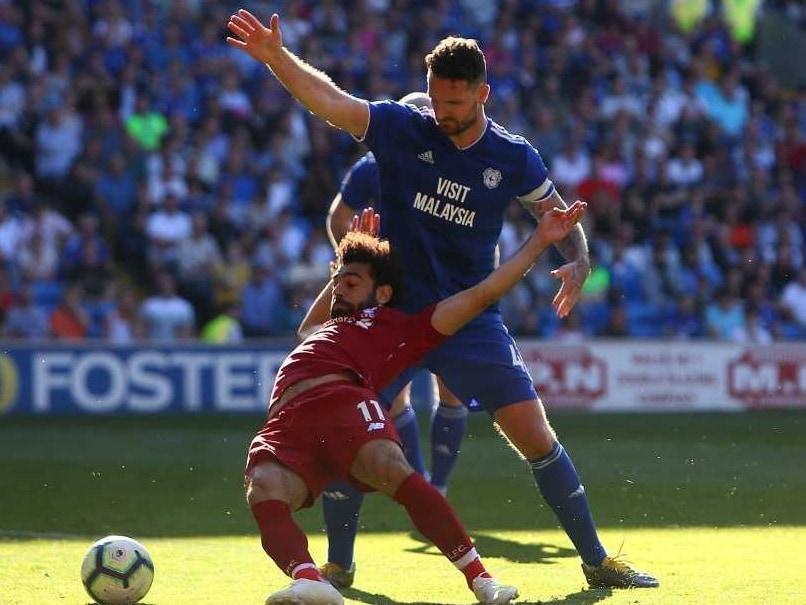 Mohamed Salah has been previously criticised for going to ground easily in attempts to win penalties.© AFP

Mohamed Salah could not have "got much higher off the diving board" according to Cardiff manager Neil Warnock after the Egyptian won a penalty in Liverpool's 2-0 win in the Welsh capital on Sunday. Salah was grappled inside the area by Cardiff captain Sean Morrison, but the theatric nature of his fall saw Warnock compare last season's Premier League player of the year to British Olympic bronze medallist diver Tom Daley. "We gave him an opportunity didn't we? He's got his arms around him," said Warnock.

"I think the end of it was a 9.9 Tom Daley job. I don't think he could have got much higher off the diving board at the end of it."

James Milner converted the spot-kick nine minutes from time to seal Liverpool's victory that took them back top of the Premier League.

Salah has also been criticised for going to ground easily in attempts to win penalties against Newcastle and Chelsea earlier this season.

"I think there is no doubt about it. If the defender uses the hand four or five times, it is a penalty."

Jurgen Klopp's men have now won their last nine games in all competitions, to also set up a Champions League semi-final against Barcelona.

But in keeping with recent weeks, Klopp could not relax until late on as Roberto Firmino and Mohamed Salah missed big chances to give the visitors a first-half lead.

Georginio Wijnaldum finally broke the deadlock in emphatic fashion with a thumping finish from Trent Alexander-Arnold's corner just before the hour mark.

Liverpool had to survive one major scare when Cardiff captain Sean Morrison failed to connect with his head when it seemed harder to miss with the goal at his mercy 26 minutes from time.

Cardiff City Mohamed Salah Sean Morrison English Premier League Cardiff City vs Liverpool, Game week 35 Football
Get the latest updates on Olympics 2020, Olympics 2020 Medal Tally , Live Cricket Score . Like us on Facebook or follow us on Twitter for more sports updates. You can also download the NDTV Cricket app for Android or iOS.