Burnley were dominant in the first half at Turf Moor, taking the lead through Chris Wood, but a much-improved Spurs battled back after the break to avoid a damaging third straight defeat. 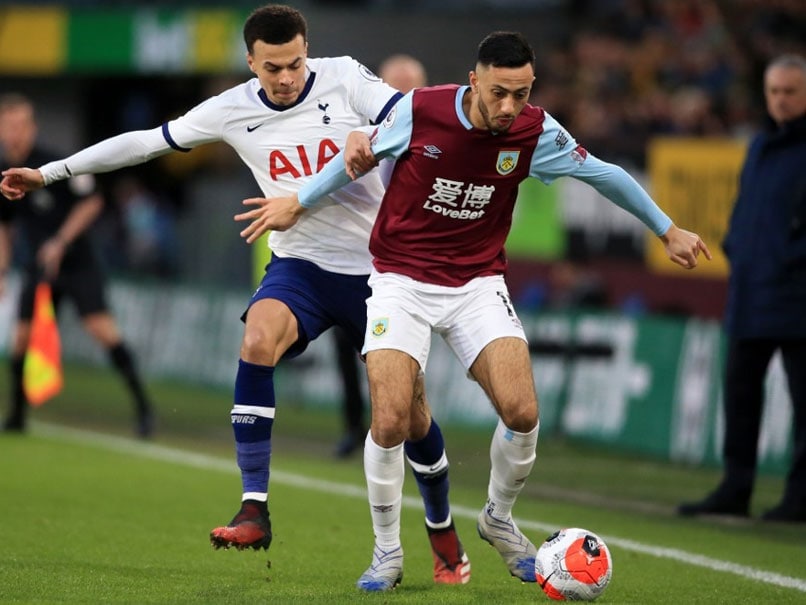 Dele Alli rescued a point for Tottenham, scoring a penalty to earn a 1-1 draw vs Burnley.© AFP

Dele Alli rescued a point for faltering Tottenham Hotspur at Burnley on Saturday, scoring a penalty to earn a 1-1 draw and keep Jose Mourinho's team in the hunt for a top-four finish in the Premier League. The home side were dominant in the first half at Turf Moor, taking the lead through Chris Wood, but a much-improved Spurs battled back after the break to avoid a damaging third straight defeat. Sean Dyche's men, who were in relegation trouble as recently as January, are now unbeaten in seven league games but will rue missing the chance to clamber above Spurs.

The draw leaves Tottenham in eighth place, just four points behind fourth-placed Chelsea, who play on Sunday, and two behind fifth-placed Wolves. Burnley are a further two points adrift.

Fifth spot could be enough to secure Champions League football next season depending on the outcome of Manchester City's appeal against their European ban.

"There was a lot of aggression at half-time, we knew we were not good enough," Alli told Sky Sports.

"If you switch off for a second they can punish you. Going in at half time 1-0 down, it was a sticky changing room to be. But we did better and created enough opportunities to win."

Spurs, again without the injured Harry Kane and Son Heung-min, started brightly but Burnley were quickly into their stride and deservedly took the lead in the 13th minute.

Jay Rodriguez shot straight at Hugo Lloris from the edge of the box but the Tottenham goalkeeper spilled the shot and Wood pounced to tap home the rebound.

Burnley continued to carry more of a threat, regularly unsettling the Spurs defence and Dwight McNeil forced a flying save from Lloris from a free-kick.

Ashley Westwood fired wide eight minutes before the break while Wood was narrowly off target from Westwood's free-kick.

Mourinho made two substitutions at half-time to lift his flat team, bringing on Lucas Moura and Giovani Lo Celso for Oliver Skipp and Tanguy Ndombele.

The Spurs boss was strongly critical of midfielder Ndombele, who arrived from Lyon for a club-record 60 million euros ($68 million, 52 million pounds) last year.

"He's a player with great talent," said Mourinho. "He has to know he has to do much better and know I cannot keep giving him opportunities to play because the team is much more important."

The visitors were given a lifeline when Ben Mee clumsily tripped Erik Lamela in the 48th minute.

Alli stepped up and sent Burnley goalkeeper Nick Pope the wrong way, burying the ball in the bottom right corner.

The goal lifted Spurs, who were suddenly playing with more confidence but Burnley's players believed they had a case for a penalty minutes later when Davinson Sanchez made a robust challenge on Wood.

There were chances for both sides as the second half wore on.

Wood shot straight at Lloris while Lo Celso curled just wide at the other end. Minutes later Burnley substitute Matej Vydra saw his close-range shot saved by the sprawling Spurs goalkeeper as they pushed for the winner.

Dyche was happy with his side's performance, despite the disappointment of conceding an equaliser.

"A very rare mistake from Ben Mee and you wonder how it would affect things, but we gripped the game and I was really pleased with it," he said.

"We build slowly, we are not the real deal yet. But I think everyone saw a good Burnley side here."

Liverpool are just three wins away from guaranteeing their first top-flight title since 1990 and Manchester City look secure in second place, seven points clear of Leicester.

Burnley Dele Alli Chris Wood English Premier League Football
Get the latest updates on Olympics 2020, Olympics 2020 Medal Tally, Live Cricket Score . Like us on Facebook or follow us on Twitter for more sports updates. You can also download the NDTV Cricket app for Android or iOS.