Bruno Fernandes said he joined Manchester United as they are a club that "wants to win everything" and that matches his winning mentality. 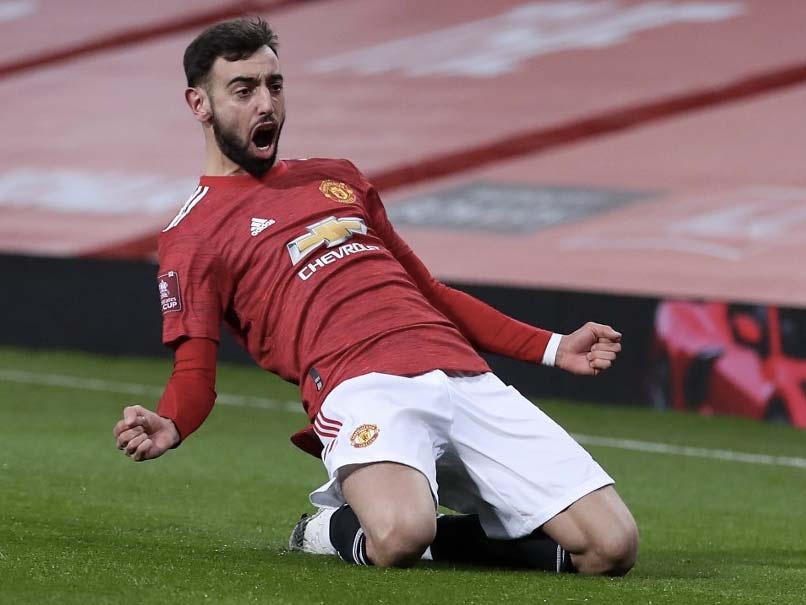 Bruno Fernandes celebrates his late winner against Liverpool in the FA Cup.© AFP

Bruno Fernandes says Manchester United suit his mentality because they are "a club who wants to win everything" as he marks his one-year anniversary at the Premier League leaders this week. The 26-year-old Portuguese international has transformed the fortunes of Ole Gunnar Solskjaer's side since joining from Sporting Lisbon in January 2020. His winner in Sunday's thrilling 3-2 win over Liverpool in their FA Cup fourth-round tie was his 28th goal for United.

"I come to the club because I knew I will come to a club who wants to win everything -- and my mentality, my way to be in my life and football is about winning," Fernandes told the Press Association news agency.

"And I will believe until it's not more possible, you know? Like when I see someone get the trophy before me, then I will (have) lost my belief."

Fernandes' winning mentality is fuelled by his hatred of losing.

"I don't conform with losing games is normal stuff," he said. "For me, losing is not normal so my mentality comes from that."

United have lost four semi-finals since the Portuguese arrived at Old Trafford, the latest earlier this month in the League Cup to Manchester City.

The club have not won the league since Alex Ferguson's retirement in 2013 and they last won silverware in 2017.

Fernandes, who has faced criticism over his recent performances, came off the bench to score with a thumping free-kick against Jurgen Klopp's Liverpool on Sunday.

The midfielder denied he was beginning to feel the strain of a punishing season.

"Of course the coach (Solskjaer) knows what is better for the team and (for the FA Cup tie) he choose to play with Donny (van de Beek) to give some freshness to the team."

Manchester United Bruno Fernandes Football
Get the latest updates on IPL Auction 2023 and check out  IPL 2023 and Live Cricket Score. Like us on Facebook or follow us on Twitter for more sports updates. You can also download the NDTV Cricket app for Android or iOS.