Chelsea salvaged a 2-2 draw at struggling Bournemouth as West Ham boosted their chances of survival with a 3-1 win over Southampton. 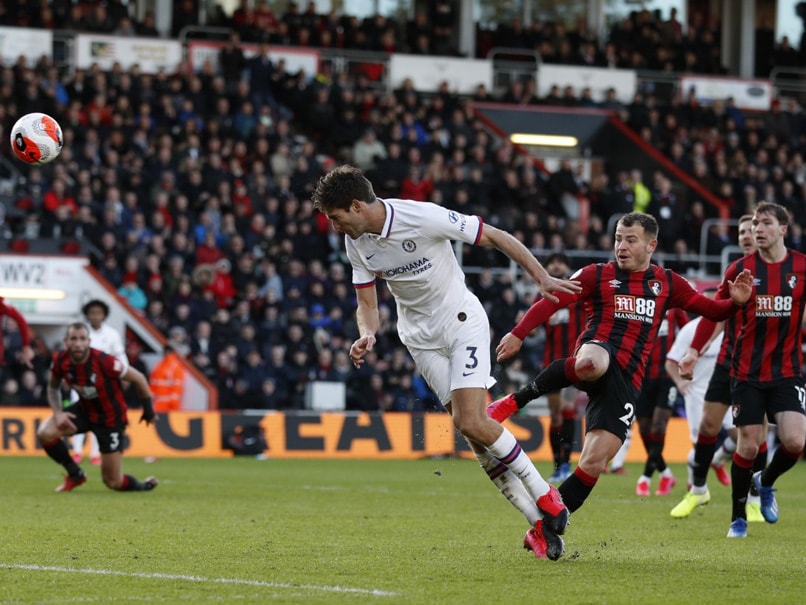 Chelsea needed a double from Marcos Alonso to salvage a 2-2 draw at struggling Bournemouth as West Ham boosted their chances of survival with a 3-1 win over Southampton on Saturday. After a 3-0 thrashing on home soil by Bayern Munich in the first leg of their Champions League last-16 tie on Tuesday, Frank Lampard was hoping for a response after what he called a "reality check" for the Blues. Instead, Bournemouth were minutes away from securing just their third league win since they also beat Chelsea at Stamford Bridge in December.

Two goals in three minutes from Jefferson Lerma and Josh King turned the game around and inflicted another blow to Chelsea's chances of holding onto their place in the top four.

However, Lampard's men have now won just five of their last 16 league games and could see their lead over fifth-placed Manchester United cut to just a point if the Red Devils win at Everton on Sunday.

At the other end of the table, Aston Villa dropped into the bottom three ahead of taking on Manchester City in the League Cup final on Sunday courtesy of a much-needed win for West Ham.

David Moyes handed Jarrod Bowen his first start since a £20 million move from Hull on deadline day in January and he made a huge impact with a fine finish to open the scoring.

The hosts' lead did not last long as Michael Obafemi quickly levelled for Southampton.

But the Hammers responded well to that blow as Sebastien Haller restored their lead five minutes before half-time and Michail Antonio added a third early in the second half to secure a first league win for Moyes since the first game of his second spell in charge on New Year's Day.

Newcastle remain without a goal in four games, but edged seven points clear of the drop zone with a 0-0 draw at home to Burnley.

Brighton remain the only side in England without a league win in 2020 as Jordan Ayew scored the only goal in a 1-0 win for Crystal Palace at the Amex.

At the other end, Ayew was clinical as he slotted under Mat Ryan to move the Eagles up to 12th.

Bournemouth English Premier League Marcos Alonso Football
Get the latest updates on ICC T20 Worldcup 2022, check out the Schedule and Live Score. Like us on Facebook or follow us on Twitter for more sports updates. You can also download the NDTV Cricket app for Android or iOS.