Bournemouth's first win in 10 games, a drought stretching back to February 1, moved them to within three points of 17th placed Watford, with three games left. 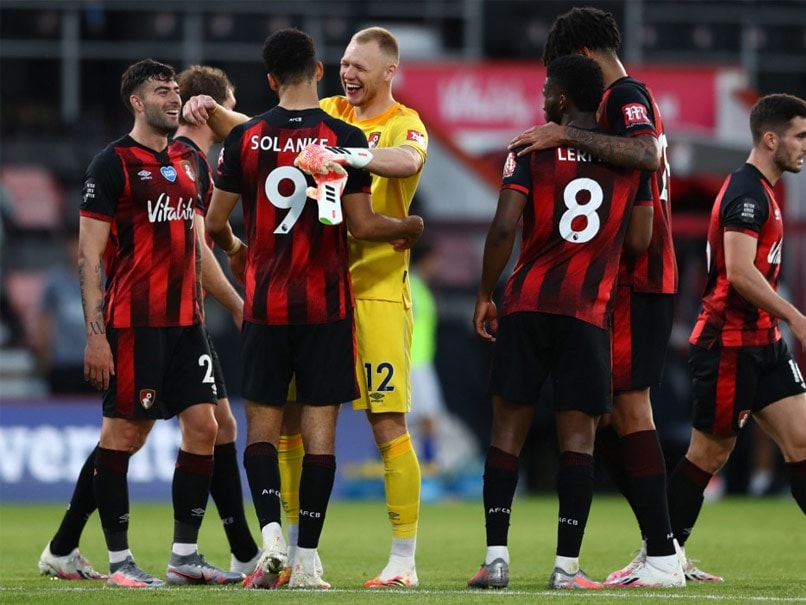 Bournemouth kept their survival hopes alive with a chaotic 4-1 victory against Leicester on Sunday.© AFP

Bournemouth kept their survival hopes alive with a chaotic 4-1 victory against Leicester on Sunday. At Dean Court, Leicester scored after 23 minutes as Jamie Vardy bagged his 23rd league goal of the season to extend his lead in the Golden Boot race. But Bournemouth were handed a lifeline when Leicester imploded during two minutes of mayhem. In the 66th minute, Leicester keeper Kasper Schmeichel booted a goal-kick into Wilfred Ndidi's back, forcing his team-mate to trip Callum Wilson. Junior Stanislas stepped up to score the resulting penalty and 101 seconds later Dominic Solanke's weak shot trickled under Schmeichel's woeful attempt to save.

Leicester defender Caglar Soyuncu sent off for kicking Wilson as he attempted to retrieve the ball from the net after Solanke's goal.

Bournemouth's luck was in and Stanislas's strike went in off Leicester's Jonny Evans for an 83rd minute own goal before Solanke's composed finish made it four in the 87th minute.

Bournemouth's first win in 10 games, a drought stretching back to February 1, moved them to within three points of 17th placed Watford, with three games left for all the teams in the relegation fight.

Cherries boss Eddie Howe said: "The situation was as bleak as it could be at half-time. But goals always change games.

"It was probably the first time in a long time where we've had some luck. We can still survive."

Fourth placed Leicester will drop to fifth if Manchester United beat Southampton on Monday, leaving their hopes of Champions League qualification in danger.

"I didn't see that coming but we are not good enough to get too comfortable. We will finish where we deserve to," Leicester manager Brendan Rodgers said.

Dean Smith's side kicked off at Villa Park languishing seven points from safety, but Egypt winger Trezeguet scored twice to keep them in with a chance of staying up.

Palace striker Christian Benteke was sent off for violent conduct after the final whistle.

Wolves stayed in the Champions League hunt, climbing to sixth place after a 3-0 win against Everton.

Raul Jimenez's penalty and Leander Dendoncker's header out Wolves two up before Diogo Jota was gifted the third by keeper Jordan Pickford's blunder.

Leicester City English Premier League Jamie Vardy Junior Stanislas Football
Get the latest updates on Fifa Worldcup 2022 and check out  Fifa World Cup Schedule, Stats and Live Cricket Score. Like us on Facebook or follow us on Twitter for more sports updates. You can also download the NDTV Cricket app for Android or iOS.