Nathan Coulter-Nile delivered a full toss on leg stump, Ben McDermott accepted the gifted gleefully and whacked it out of the stadium, with a change of ball required. 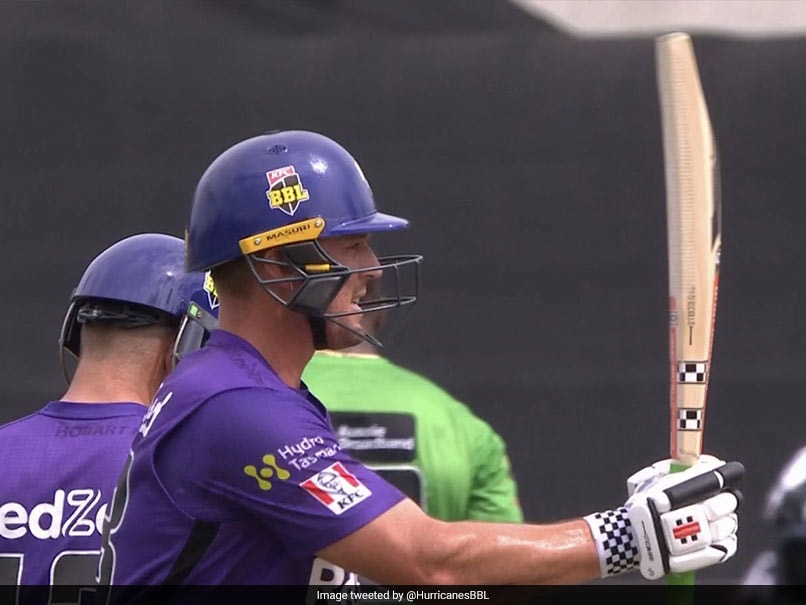 Ben McDermott and Matthew Wade gave their team the perfect platform for an assault in the backend of the innings, but other Hobart Hurricanes batters failed to take advantage of it with the team finishing at a total of 180 for six in a Big Bash League match against Melbourne Stars on Friday. Wade scored a 27-ball 39 but the real star of the innings was McDermott who smashed a 43-ball 67 that included a massive hit out of the ground. On the fourth ball of the 12th over, Australian pacer Nathan Coulter-Nile delivered a full toss on leg stump, McDermott accepted the gifted gleefully and whacked it out of the stadium, with a change of ball required.

The official handle of the BBL shared a clip of McDermott's massive six, with the caption reading: "Lost ball: if found, please return to @BlundstoneArena".

McDermott and Wade put on 93 runs for the first wicket but after the duo were dismissed, the Hurricanes lost their way a bit.

However, a late blitz from Tim David (22 not out off 12 balls) helped the team post an above average score in Hobart.

In reply, the Stars started slowly with Marcus Stoinis struggling a bit to find the boundaries. He was finally dismissed by Tom Rogers for for 18 off six balls. His opening partner, Joe Clarke, did a much better job, scoring 52 off 40 balls but he fell prey to D'Arcy Short.

In another huge scalp for the Hurricanes, Riley Meredith sent the dangerous Glenn Maxwell packing after he had scored 12 off nine balls.

At the time of writing this, Hobart Hurricanes were in the driver's seat with the Stars four down for 112 runs in 14 overs, needing 69 runs off the final six overs.

Andre Russell was out there in the middle with Hilton Cartwright giving him company. With the big-hitting West Indian still out there, Hobart will know there are not safe home yet.

Andre Russell Cricket
Get the latest updates on Fifa Worldcup 2022 and check out  Fifa World Cup Schedule, Stats and Live Cricket Score. Like us on Facebook or follow us on Twitter for more sports updates. You can also download the NDTV Cricket app for Android or iOS.