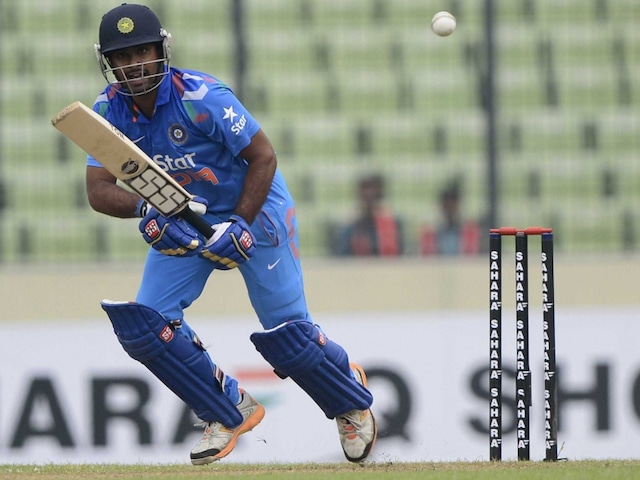 Hyderabad captain Ambati Rayudu has been handed a two-match suspension by the Board of Control for Cricket in India (BCCI) for breaching the board's Code of Conduct during a Syed Mushtaq Ali Trophy match between Hyderabad and Karnataka on January 11. Rayudu is banned from participating in the first two matches for Hyderabad in the upcoming Vijay Hazare Trophy, which starts from February 5. The charge was levelled by on-field umpires Abhijit Deshmukh, Ulhas Gandhe and third umpire Anil Dandekar.

Rayudu pleaded guilty to the offence and accepted the sanction proposed by BCCI and therefore there was no formal hearing.

The suspension has come in the wake of Rayudu's reaction after the aforementioned match was marred by a fielding controversy, which saw Karnataka win by a two-run margin. During the match, Karnataka opener Karun Nair flicked a Mohammed Siraj delivery over mid-wicket and picked up a couple of runs. However, Mehdi Hassan had touched the boundary rope while picking the ball up. The video replays showed the incident but on-field umpire Gandhe did not go upstairs for a video referral.

When Karnataka came out to bowl, skipper Vinay Kumar walked up to the umpire to speak about it and two runs were added to the target, which was changed to 206 from 204, which irked Rayudu. As it turned out, Hyderabad lost the tie by two runs as they folded up scoring 203/9 at the end of their 20 overs.

Talking about the matter, Rayudu had said, "There was some confusion in the middle at the start of our innings. What I went and told the umpire was 'sir you cannot change the score, we are batting for 204 as our target.

"At the end, we went and asked to start the Super Over. That is exactly our point of contention. We never even thought of stopping the second match, that has got nothing to do with us. We were insisting that our match was not complete, we still have to play the Super Over. That is exactly why we went to the middle, we were actually going to warm up then," Rayudu had further added.

The BCCI is further looking into the role of Hyderabad team manager in this untoward incident.

Comments
Topics mentioned in this article
Ambati Rayudu India Cricket Team Cricket
Get the latest Cricket news, check out the India cricket schedule, Cricket live score . Like us on Facebook or follow us on Twitter for more sports updates. You can also download the NDTV Cricket app for Android or iOS.