The opening move of the second game on Sunday was a big success for Magnus Carlsen and it was a great pull back by the Norwegian after Viswanathan Anand had got an easy draw as black in the first game on Saturday. 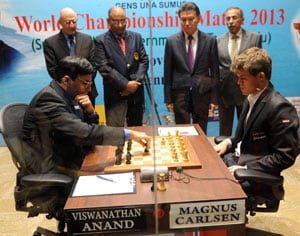 Defending champion Viswanathan Anand offered apology after he played out a tame draw with white pieces in the second game of World Chess Championship clash against Magnus Carlsen of Norway in Chennai on Sunday.

"Today it's my turn to tender a slight apology," said Anand.

"The position we got after move 12 is a very sharp one. I have studied it in the past, it's very very complicated and I had not really expected it. That's clear," he said at the post-game conference at the Hyatt Regency hotel.

The opening move of the second game today was a big success for Carlsen and it was a great pull back by the Norwegian after Anand had got an easy draw as black in the first game on Saturday.

"I will not talk too much about the opening move. I think the critical point was on move 18 when Vishy could have tried but black seemed to be doing fine," world number one Carlsen said.

Anand said things might have become risky for him after Carlsen's opening surprise coming in the form of a Caro Kann defense.

"I had to decide whether to fly blind because it's clear that he would have been into more details. I decided to go for a slightly solid line, a slightly prudent decision today, essentially after the queen exchange there is nothing much happening," said the five-time champion Anand.

Anand, however, said the battle royale that has thus far produced just 41 moves in the two games would only get better.

"We both have a little information now as to what the other person is trying, I am sure it will get interesting," the local hero said.

Asked about the preparation for this game's opening move, Anand said, "I was trying to recollect all sharp variations around move 13-15, trying to figure out what he might be aiming for before he took the path to equality."

Carlsen said the start thus far was similar to his Candidates' Tournament victory that earned him the right to challenge Anand.

"I did not know what to expect really. I feel it is a little bit similar to my start in the Candidates Tournament where I got an easy draw as black in the first and conceded an easy draw with white in the second game. Then things really took off," he said adding, "like Vishy said, we are both settling in."

The Norwegian referred to Anand as his toughest opponent he would have had currently.

"He has been world champion for many years now and obviously he has beaten my other opponents, surely he is the toughest opponent."

Anand was equal in his praise for Carlsen while replying to a similar question.

"Magnus' results in the last few years speak for themselves. Definitely he is the toughest," Anand said.