Magnus Carlsen slept off in the middle of a tame draw vs Viswanathan Anand on Tuesday and admitted he was not in top shape. 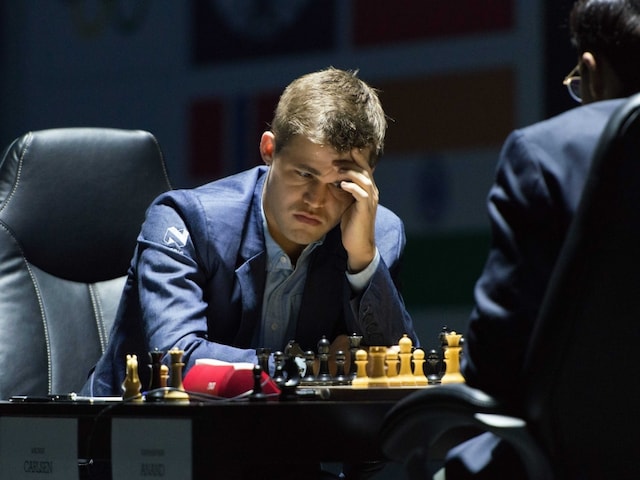 Magnus Carlsen drew Game 8 of the World Chess Championship with Viswantahan Anand to retain his one-point lead. However, he created a buzz on Twitter after a picture of him dozing off appeared on the social media. (Game 8 Report | Highlights)

After the exhaustive and enthralling draw on Monday in the seventh game, which lasted for more than six and half hours (122 moves), Tuesday's game lasted a mere 41 moves. Carlsen leads the 12-game Match 4.5-3.5 going into the rest day on Wednesday. Was there some subtle psychology at work or was Carlsen genuinely unwell? These were the questions doing the rounds on Twitter.

Carlsen wore a sleepy look throughout the game and even appeared to have dozed off on occasions.

Interestingly Peter Heine Nielsen, who works for Team Magnus now said "Today we have prepared an interesting idea. Lets's see how it goes?"

There were reactions on Twitter after the 23-year-old Carlsen was caught napping, against a much older opponent. Carlsen had won the title against Anand in Chennai last year.

Magnus Carlsen's genius as evident in his wins as in the games he manages to draw half asleep. #anandcarlsen2014

However, Carlsen admitted he was not in top shape when the eighth game started: "Wasn't in best of shape at start but I felt I managed to be fresher as the game progressed."

The rest day will do both players a world of good. With only four games to go and a point separating Carlsen and Anand, the stakes will be high.

Comments
Topics mentioned in this article
Magnus Carlsen Viswanathan Anand Chess
Get the latest Cricket news, check out the India cricket schedule, Cricket live score . Like us on Facebook or follow us on Twitter for more sports updates. You can also download the NDTV Cricket app for Android or iOS.