Viswanathan Anand, playing black pieces, drew a marathon seventh game of the World Chess Championship to Magnus Carlsen on Monday. Both players slugged it out over 122 moves. 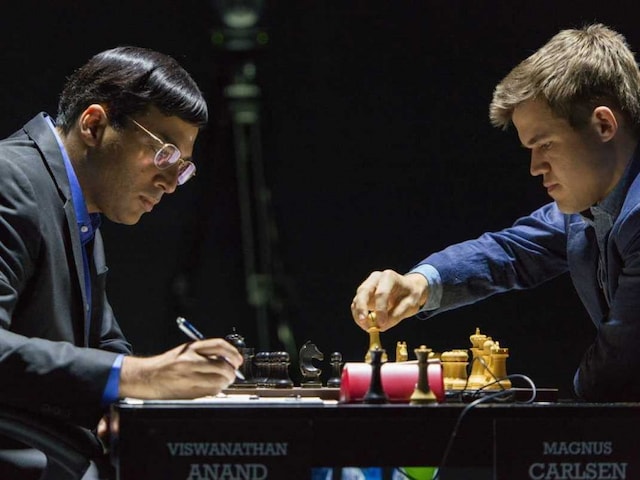 Anand and Carlsen in action during the World Chess Championship in Sochi.© AP

Trying to recuperate from a double blunder in the previous sixth game of the 12-game match, Anand did not show any signs of fatigue and matched Carlsen move for move in what was considered a grudge game.

The Indian, who was facing a double white from Carlsen according to the rules laid in, was at his best in defense even though the game was fought in the most recent theoretical battle.

For the records, it was as theoretical as it could get in a world championship match. Carlsen took the naton and went for the extensively analysed Berlin defense with his white pieces which was an indication earlier enough that the Norwegian world champion has worked out a plan to tackle Vishy's deep preparation in the opening.

As it happened, Dutch Grandmaster Anish Giri could not stop himself from tweeting that 'when it came to Berlin, Carlsen knew who to follow'. The Dutch GM was obviously referring to his game against Teinmour Radjabov of Azerbaijan just a couple of weeks back and after Carlsen followed him to the hilt there was no doubt that Giri was making sense.

Anand in fact checked himself not to follow that game and it was clear that the Indian ace had analysed the details himself not to fall in a soup. Instead what followed was a deeply analysed sequence of moves, wherein Anand had worked out his way to equality.

"These are the kind of positions when you have to be lucky, but if you are playing in a world championship match you better be correct," said Grandmaster Abhijeet Gupta, who has been leanly following the match.

As it turned out, the game was in Anand's grip only for a short while as Carlsen took control soon after. The Indian was subjected to some technical questions on the game once the second time control was over.

It was a piece sacrifice by Anand that opened the debate and the Indian ace was thereon trying to figure out a way to defend a piece-down endgame which was theoretically drawn.

As it happened, Carlsen went to haunt Anand for a long time with his extra piece but the result of the game was never in doubt. A draw it was and a draw it finally became after a 122-move long game.

While Anand had to undergo a long routine of finding the saviours, its clear that only the Indian ended up a winner after such a long ordeal.