Viswanathan Anand is aiming for his sixth world title, having lost to Norway's Magnus Carlsen in Chennai last year. This year's world championship is being played in Sochi. Catch all the highlights here. 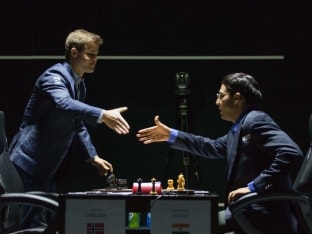 Carlsen started off with a bang and then Anand fought back to draw level. Carlsen now has a point advantage.