Viswanathan Anand and Magnus Carlsen played one of the longest game in the history of World Chess Championship. 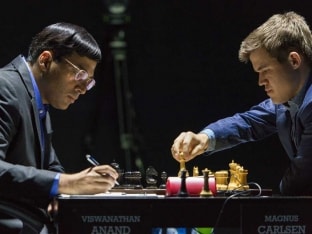 Anand and Carlsen in action during the World Chess Championship.

The game was one of the longest in the history of World Chess Championship.

At the end of the seventh round, Carlsen leads the 12-round match with four points to Anand's three points.

On Tuesday, Anand will play with white pieces in the eighth round.

Carlsen had defeated Anand in the world championships played in Chennai last year.

Comments
Topics mentioned in this article
Chess Viswanathan Anand Magnus Carlsen
Get the latest updates on IPL 2021, IPL Points Table , IPL Schedule 2021 , live score . Like us on Facebook or follow us on Twitter for more sports updates. You can also download the NDTV Cricket app for Android or iOS.