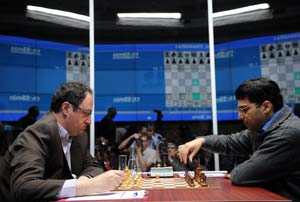 The tortuous four-hour battle marked the Indian master's first defeat to Gelfand in a classical chess match since 1993 and put under threat a title he first won in 2000 and has held for the past five successive years.

"I started to drift a little bit at the opening," the 42-year-old admitted in the post-match press conference.

But he dismissed suggestions that he should have won or assumed a more aggressive strategy in opening matches during which his challenger at times appeared psychologically overwhelmed.

"I play one game at a time," Anand said.

The 43-year-old Gelfand now leads the series 4-3 under a scoring system that awards the winner one point and the loser none. Draws see players share a half point each.

The World Chess Championship is being contested in Moscow -- seen by many as last century's capital of chess, for the first time since an epic 1984-85 clash between Anatoly Karpov and Garry Kasparov was aborted and later replayed.

Organisers decided to add drama to this event by staging it in the 19th century splendour of the Tretyakov, the first title decided in an art gallery since Stalin ordered one played at the Pushkin Museum in 1935.

But the matches had largely featured tepid play that lacked the penetrating lightning attacks for which the tournament is fabled until Sunday's watershed moment.

Gelfand began the first match of the second half of the series playing white, a position that presents him with the opportunity to strike first.

He went on to craft a balanced attack that eventually forced Anand to slide his bishop out of position at b7 on the 14th move and then struggle with the time clock as he tried to think up ways to stay in the game.

A live computer analysis of the match showed Anand straining under pressure and making questionable decisions on both the 23rd and 25th moves that left the Minsk-born and Soviet raised Gelfand smelling blood.

Anand resigned on the 38th move with his king backed unguarded into the corner at h8 and Gelfand moving in for the kill with a rook and two knights.

Gelfand said he felt no jitters as the end drew near and the possibility of him assuming a substantial series lead hung tantalisingly close.

"It was not a very complicated setup," Gelfand told reporters.

"I checked a few times if my mate could be prevented and the answer was no."

Classical chess, in which players have the luxury of time to ponder their moves, often end in draws at the highest level and the win gives Gelfand a massive psychological boost going into Monday's eighth contest.

The Indian veteran's form had already been questioned during a three-year spell without tournament wins that saw his world rank slip to number four.

But bookmakers in both Moscow and London made the 20th ranked the Israeli an underdog despite his brilliant play in a star-studded 2011 championship qualification tournament that earned him the right to challenge Anand.

The 2011 event saw Norway's top-ranked prodigy Magnus Carlsen pull out without an explanation and Anand seemingly destined to retain his title for the third successive time.

The $2.55 million event will see the winner take home $1.5 million in prize money put up by a group of Russian billionaires who outbid their Indian rivals for the right to stage the globally-watched event.