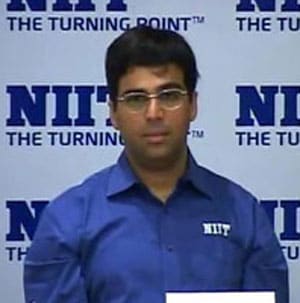 Shrugging off the disappointment of losing the World Championship to Magnus Carlsen, Indian Grand Master Viswanathan Anand is all set to be back in competitive circuit taking part in the prestigious London Chess Classics, which is currently underway here.

Anand, who turned 44 on Wednesday, will like to get back to winning ways in this tournament.

Taking into consideration the match dates, the organizing team, led by IM Malcolm Pein had long made it clear that this year's 'Classic' will not be on traditional lines as they wanted to accommodate both Anand and Carlsen for the tournament.

The script was judiciously changed to a rapid format with 16-players instead of the normal 9-10 players round robin tournament giving options to both Anand and Carlsen to join as per their wish post the match. Carlsen decided not to play.

The 16-players have been divided in to four groups and the winner of each group will proceed for the semi-finals after a double round-robin play-off.

The Indian legend will start his campaign with black against McShane and will meet Adams later in the day.

The first three days will complete the round-robin format with two games slated for each day and it will be followed by the knockout. Anand starts his section as the top rated and is likely to top his group.

Even as Carlsen opted out, the participants' list is a virtual who's who with Vladimir Kramnik of Russia as the top player in group B. Another Russian ace GM Peter Svidler and Englishmen Jonathan Rowson and Matthew Sadler complete this group.

Hikaru Nakamura who stands at number three in live ratings, starts as the favourite in group C, where he has strong company in Boris Gelfand of Israel, top rated woman ever Judit Polgar of Hungary and Gawain Jones of England.

In the group D, Fabiano Caruana of Italy starts as the hot favourite with Emil Sutovsky of Israel and English duo of Nigel Short and David Howell.

The 'Classic' has been growing many folds thanks to some brilliant improvisation over the years.

To start proceedings this year, celebrities from different walks of life partnered one of the top players to play a game for charity.

Anand partnered Rude Tube presenter Alex Jane and played out a draw with Peter Svidler who was on the side of Shingai Shoniwa, singer and bassist for the Noisettes, an English indie rock band from London.

With the niceties over, it will be time for some real action for Anand.

In the open section being organized simultaneously, GM Abhijeet Gupta is on three points from four rounds along with GM M Shyam Sundar, GM D Harika and WGM Tania Sachdev. With five rounds still to come here, as many as nine players share the lead on 3.5 points apiece.

The top two finishers after four rounds, Istratescu and Sutovsky have been elevated in to the elite section as was announced earlier.