Viswanathan Anand fell behind Pentala Harikrishna in ELO rating after his fourth round loss at the Candidates Chess. The five-time world champion is back as India No. 1 after his draw in the fifth round. 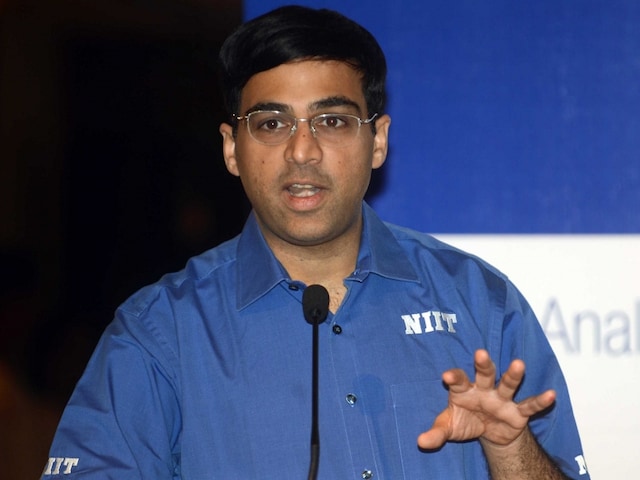 Viswanathan Anand is currently at 2.5 points in Candidates Chess, a tournament which will decide world champion Magnus Carlsen's next challenger.© AFP
Moscow:

The draw ensured Anand regain his No. 1 rank among Indians after a brief slip saw him lose his top place to Pentala Harikrishna. The five-time world champion's ELO rating is 2762, while Harikrishna's is 2758.

In the fourth round, Anand had lost to Sergey Karjakin of Russia and his ELO rating fell to 2763, compared to Harikrishna's 2763.3. This was the first time in close to three decades that Anand had lost his No. 1 ranking.

In the fifth round, Anand played it safe with white pieces and it was almost an uneventful draw in the end.

For the first time in five rounds, all four games ended in draws in the eight-player double round-robin tournament. Overnight leader Karjakin held on to his own and drew with Bulgarian Veselin Topalov, Anish Giri could do little with hie white against Peter Svidler of Russia while Armenian Levon Aronian could not find a way to penetrate the defences of Fabiano Caruana of United States.

The draw melee ensured that the status quo remained and Karjakin remained a neck ahead of the field with 3.5 points coming from two victories and three draws thus far.

Aronian remained the nearest contender to Karjakin on three points while Anand, Giri, Caruana and Svidler are tied third on 2.5 points apiece. In seventh position is Nakamura, on two points, who is training his sights for a comeback while Topalov stands last at this juncture with 1.5 points in his kitty.

There are nine rounds still remaining in the 420000 Euros prize money marathon that will decide the next challenger for world champion Magnus Carlsen.