Viswanathan Anand, Magnus Carlsen Rematch to be Held in Sochi

Magnus Carlsen became the world champion last November by defeating Viswanathan Anand in Chennai. However, the Indian veteran earned a rematch by winning the Candidates Tournament in Khanty-Mansiysk. 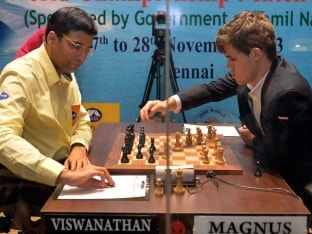 Vishwanathan Anand and Magnus Carlsen during a match © AFP

The much-anticipated World Championship rematch between Indian veteran Viswanathan Anand and title-holder Magnus Carlsen will be staged from November 7 to 28 in Sochi, Russia.

FIDE president Kirsan Ilyumzhinov announced the schedule at a press conference, saying that the budget for the event has been set at USD three million.

The match will be played at the Olympic Village in Sochi.

Both players have agreed with this plan, the 'ITAR-TASS' news agency reported.

Russian Chess Federation president Andrei Filatov has also confirmed that the body will participate in the organisation of the event.

However, the Indian, who held the world title from 2007 to 2013, earned a rematch by winning the Candidates Tournament in Khanty-Mansiysk.

Comments
Topics mentioned in this article
Chess
Get the latest updates on Fifa Worldcup 2022 and check out  Fifa World Cup Schedule, Stats and Live Cricket Score. Like us on Facebook or follow us on Twitter for more sports updates. You can also download the NDTV Cricket app for Android or iOS.