Defending champion Viswanathan Anand showcased fresh preparation and got an easy draw with black against rival Boris Gelfand in the second game of the World Chess Championship here. 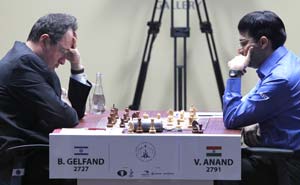 Defending champion Viswanathan Anand showcased fresh preparation and got an easy draw with black against rival Boris Gelfand in the second game of the World Chess Championship here.

Anand equalised easily out of the opening springing a surprise as early as on move five by going for a rare move as black.

Gelfand spent a lot of time and it was clear that his ammunition had run out at this move itself. The fight for equalising had begun for Anand and he drew level on psychological terms after being pressed as white in the first game of the match.

The preparation part took a heavy toll on Gelfand and as the game progressed, Anand once again produced what he is best at - deep preparation backed by deep analysis. Gelfand could not think of anything better than going for the trade of queens and it was signal enough that Anand had what he was looking for.

As it happened in the game, Anand's tenth move was the perfect road to equalising. The center was wide open soon after as Gelfand went on an exchanging spree and it took little time for Anand to come up with the new move which put the Israeli again in deep thought.

Middle game never happened and Gelfand might have to look for other methods as Anand seems clearly better prepared with his black pieces. It may be recalled that the Indian ace had also successfully employed the Slav defense to beat Russian Vladimir Kramnik in 2008.

There is also speculation that Kramnik might be helping Gelfand for this match. The main reason being that Gelfand and Kramnik have been friends for a long time.

It was a level position once the queens were off the board. Also the presence of opposite colour Bishop was not anything that could enthuse either player.

"I had a very small and symbolic advantage but black's position is fine anyways," said Gelfand in the post game chat.

Anand has played his cards right and the balance now tilts again in the favour of the reigning champion. The world championship seems set to take off another way when the matches begin after a day off.

Anand was considered an overwhelming favourite coming to this match, but Gelfand has also proved himself very well.

Anand's team will have to work out new ways, and Gelfand needs another surprise. For the record, the second game lasted just 25 moves and was not exactly entertaining for the chess buffs across the world.

Anand enthralled the audience in the press room with his nonchalant sense of humour. Asked about the first game and the fact that there was a similar game between computers some time back, the Indian ace replied: "Computers have nothing better to do."