The game of fluctuating fortunes witnessed Viswanathan Anand exerting early pressure and Magnus Carlsen was on the edge while towards the end Norwegian let go of his opportunities in what was a keenly contested third round game. 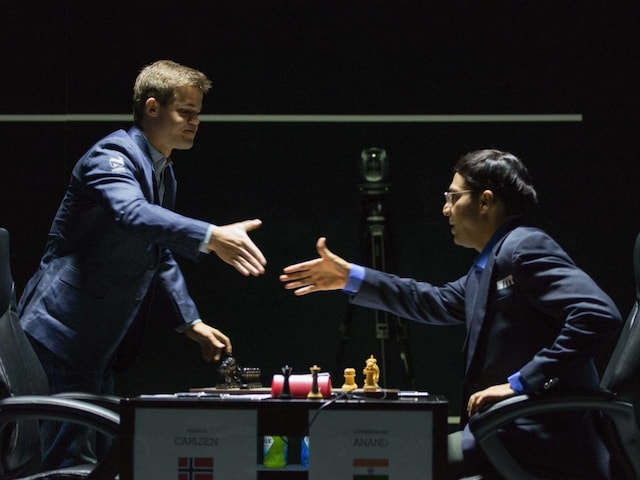 Viswanathan Anand and Magnus Carlsen have 1.5 points each after three rounds to share the second spot.© PTI
London:

Former world champion Viswanathan Anand finally put up a brave front in a difficult situation to draw with reigning world champion Magnus Carlsen of Norway in the third round of the London Chess Classic now underway here. (Click here for latest Chess stories)

The game of fluctuating fortunes witnessed Anand exerting early pressure and Carlsen was on the edge while towards the end Norwegian let go of his opportunities in what was a keenly contested game of the third round.

After one decisive game in round one and none in round two, the third day also witnessed just one decisive game wherein Maxime Vachier-Lagrave of France defeated now-struggling Veselin Topalov of Bulgaria. A leader at the start of this final edition of the first Grand Chess Tour, Topalov needs a miracle to hold on to his top spot in the tour now.

The other three games of the ten-player round-robin tournament ended in draws but not without action. Dutch Grandmaster Anish Giri survived a hopeless-looking position against his Russian counterpart Alexander Grischuk while Hikaru Nakamura fought his way back from the jaws of defeat against Fabiano Caruana in the all-American duel. In the other game, local wildcard entrant Michael Adams remained impregnable and held Levon Aronian of Armenia to an easy draw.

With six rounds still to come in the USD 300,000 prize money tournament, Giri was joined at the top of the tabled by Vachier-Lagrave on two points while Carlsen, Anand, Aronian, Adams, Grischuk, Nakamura and Caruana inched themselves up to 1.5 points with three draws apiece. Topalov with just a half point from his two outings, is currently at the bottom of the tables and stands to lose out on a share of the USD 150,000 prize purse, reserved for the top three finishers of the Grand Chess tour.

For Anand it was another tense game with Carlsen in which the Indian pressed with his white pieces. The Berlin defense has been the flavour of the season and Carlsen stuck to the same inviting Anand to find a way to break what is known as the "Berlin Wall" in chess circles.

Anand succeeded but not quite. After a series of exchanges in the queen-less middle game, Anand had the better placed pieces and good control of the position but the Indian ace could not spot the most precise way to progress. As it happened in the game, Carlsen fought back and was even pushing for a victory in the later stages when Anand slipped out.

Anand was naturally critical of his play after the game, "You try to find the most exact way and of course I succeeded in... I had no difficulty at all in finding some really stupid continuation. And suddenly I'm just lost. This sort of stuff is just embarrassing," the five times world champion said.

Vachier-Lagrave defeated Topalov out of a Sicilian Najdorf where the latter played black. Getting a small advantage in the opening, the French Grandmaster pounced on an opportunity in the middle game to dismantle black's queen side and soon the white rook invaded the seventh rank for the knockout punch.

Anish Giri's only ally in a lost position was Grischuk's clock as the Russian was once again in serious time scramble. Grischuk mishandled his winning position letting Giri heave a sigh of relief.