With Anand, Aronian and Nakamura on 6.5 points, Hungarian Peter Leko joined Karjakin in fifth spot a full point behind while P Harikrishna slipped to joint seventh on five points, after suffering a shock defeat at the hands of Yifan Hou of China. 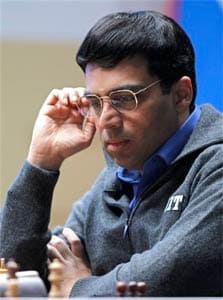 World champion Viswanathan Anand could not breach the solid defenses of Sergey Karjakin of Russia and played out a draw while world number one Magnus Carlsen continued with his winning streak in the 75th Tata Steel chess tournament here.

In the tenth round, the Indian ace's efforts proved little to break Karjakin's solid defense right till the end of a rather simplified game.

Anand was joined in second spot by Levon Aronian of Armenia and Hikaru Nakamura of United States after they scored victories in contrasting fashion against Wang Hao of China and Fabiano Caruana of Italy respectively.

Meanwhile, Carlsen stretched his lead to eight points as Erwin L'Ami of Holland proved no match for the rampaging Norwegian.

With Anand, Aronian and Nakamura on 6.5 points, Hungarian Peter Leko joined Karjakin in fifth spot a full point behind while P Harikrishna slipped to joint seventh on five points, after suffering a shock defeat at the hands of Yifan Hou of China.

The Queen's Indian defense by Karjakin met with the Petrosian system and Anand secured a small advantage in terms of better space control.

However, Karjakin was precise in his defense even though it looked at some point that Anand was increasing his advantage. Once Karjakin was able to get rid of his weak pawn on the queen side the draw was immediately agreed.

Harikrishna ran out of steam against Yifan Hou. Having done so well in the tournament against high class opposition the loss against Yifan was simply shocking. For the records, Harikrishna stood better after a Keres attack as white against the Sicilian but Yifan fought back in the game after trading the queens.

Harikrishna made another error and Yifan pounced on it to reach an advantageous rook and pawns endgame where precise technique followed to give the Chinese her second victory in the tournament.

Carlsen crushed L'Ami in a Caro Kann defense game as white. The Norwegian secured a good position out of opening and then took advantage of weakened pawns on the queen side to force matters.

In other important games of the day, Aronian had it easy as white against Wang Hao out of an English opening while Nakamura got an important victory with black pieces after Caruana went haywire.

The tournament now reaches its final leg with just three rounds to come after a rest day. Anand has a chance to catch up if he beats the tail-enders he is set to meet.