World champion Viswanathan Anand's winless streak continued as he played out a tame draw against out-of-form Sergey Karjakin of Russia -- his fourth in as many games -- in the fourth round of fifth Final Masters here. 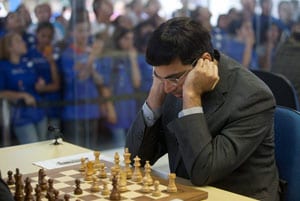 World champion Viswanathan Anand's winless streak continued as he played out a tame draw against out-of-form Sergey Karjakin of Russia -- his fourth in as many games -- in the fourth round of fifth Final Masters here.

Playing in his first tournament after his world championship triumph in Moscow earlier this year, Anand could not force a win against Karjakin and inched himself up to four points under the soccer-like scoring system in place to occupy the fourth spot.

Italian Fabiano Caruana surged ahead of the field with a crushing victory over Francisco Vallejo Pons of Spain. The other game of the day was fought intensely but Armenian Levon Aronian missed a simple win before finally drawing with world number one Magnus Carlsen of Norway.

With six rounds still remaining in the super tournament, Caruana took his tally to 10 points with his third victory out of four games. Aronian continued to follow the leader but the gap has increased and Caruana now has a healthy four points lead over his nearest rival.

Carlsen moved to third spot on five points while Karjakin and Vallejo Pons share the fifth spot on two points in the six-player double round-robin event.

Anand did not have any troubles as black but did not get any chance either against Karjakin who opened with the queen pawn. The Indian ace went for the Slav defense, an opening that had served him quite well in the world championship match against Boris Gelfand of Israel.

Karjakin went for an early trading of light square Bishop which was indication enough that the Russian was hoping for a safe game with little risk.

Anand exchanged pieces at regular intervals and just had to find resources which maintained the balance even though the position appeared to be slightly better for white. After all the minor pieces had changed hands, the result of the game was in no doubt and after 31 moves the players shook hands.

Caruana faced the French defense for the second time in the tournament. Earlier in the first round, the Italian was lucky to beat Carlsen in the same opening and this time he wisely side-stepped from the theoretical discussions of a Winawer variation.

Going for the Advance variation, Caruana sacrificed a couple of pawns which was clearly a result of his home preparation and launched an attack on the king side soon after. Vallejo Pons got just one chance to defend his position and after he missed that his king side was blown away in no time. Caruana won in just 24 moves.

Wild complexities ensued in the game between Carlsen and Aronian wherein the former opted for a close Ruy Lopez. Aronian went for the king side while Carlsen hung in there in the middle game before making a terminal blunder on move 27.

However tension got the better of Aronian who could not quite place the winning plan and instead went for a safer continuation. The game was eventually drawn in 48 moves.

After the next round, the event will move to Bilbao in Spain where the second half will be played. In the next round, Anand meets Carlsen, Caruana has to tackle Aronian while Karjakin take on Vallejo.