Viswanathan Anand confident of being the champion again

Five-time chess world champion Viswanathan Anand on Thursday, said he was not interested in thinking who would win the next title but believed that he would do it again.

Five-time chess world champion Viswanathan Anand on Thursday, said he was not interested in thinking who would win the next title but believed that he would do it again.

"I hope it's me. After me, me... what can I say... I am not trying not to think of who is coming next. Because, I am not interested," the chess wizard said when asked who would be the next world champion.

Anand said that he does not believe in numbers when asked if he was looking to emulate Russian legend Garry Kasparov's feat of six titles.

"I only think one championship ahead. I don't think about numbers. This time I was only playing against (Boris) Gelfand, I was not thinking about the fifth (title) or something."

Anand said that he opted out of India's team for the chess Olympiad in Turkey, scheduled from August 27-December 10, as he did not enjoy the format.

"I had issues with the format. It's already been several times that I've done this. I want to concentrate on some other tournaments."

Asked if it's okay for stalwarts like him and Sachin Tendulkar in cricket to opt out willingly, Anand said: "It's not that I want to make a category of stalwarts and then have a special sort of rights. I really don't know what to say about this."

On critics who pointed fingers at his age, the 42-year-old said: "It sounds strange to me and keep on explaining that how a 40 or 42-year-old keeps playing chess.

"It's a strange phenomenon. If you love the game and you do hard work you will still do well. People may be surpised but you shouldn't have to explain it so much."

"In general, it's not my aim to play chess for them. You play because it gives you joy. As for the critics, the best is just not to pay any attention," Anand said.

"I am wondering at myself. I play each championship in hope that it goes well. I don't try to find explanations of it. I am very glad if I win," he said about his win over Gelfand, a year older to him.

Terming his world championship fight against Gelfand the toughest of all, Anand said, "When I played against Gelfand, I already played two matches. In a way, I had exposed my cards. Gelfand is much too good and sophisticated a player to miss that kind of materials. He simply had some open cards from me to prepare himself effectively.

"I expected him to be difficult and that's how it turned out. He was able to prepare himself well, having got a few open cards from me. He conducted himself exceedingly well. We were trying every game without making any harakiri. Last four games were pretty intesne."

Terming 21-year-old Norwegian Magnus Carlsen as one of the fine upcoming talents, Anand said: "He is an amazing talent. He is one you see once or twice in a century. We drew a couple of times in our last meeting."

Famouse for his rapid mastery, he said: "It is a help. But when you are playing world championship, tension is a much big factor than your form in the rapid chess." 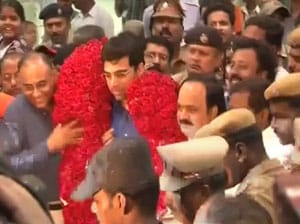 About his team of seconds that included Kolkata's GM Surya Sekhar Ganguly, he said: "We worked extremely hard like every time. But lot of cards were exposed. That's why, it's becoming easier for the opponents. That's the reality we will have to deal with it more and more.

Asked about being together for long, he said: "There are some disadvantages as well. It's the same people, there's limited pool of ideas. But these things, you don't evaluate too much."

The Chennai-based world champion who resides in Malaga, Spain, ranked the European country alongside Brazil of the golden era of Pele as the best sides to have played football.

"I've only seen highlights of Pele's team. Very difficult to compare. They belong to the same category.

"I feel very happy for Spain. They just keep on winning. The final was so one-sided, the difference between Spain and Italy looked so big," the chess maestro said about Spain's victory over Italy in the Euro Championships.

On his one-year-old and three months son Akhil, he said, "At some point, I will leave him near chessboard and see if he's interested or not. I will try to introduce him to lot of things and see which one catches his fancy."