Viswanathan Anand bounces back with a win against Gelfand 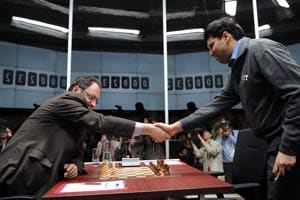 On Sunday night in the seventh game, Anand had ended on the losing side but the 'Chennai Tiger' as he is known roared back with a 17 move victory.

The Score once again stands equal 4-4 in the 12 Game Match. Tuesday is the rest day and the ninth game will be played on Wednesday with Gelfand wielding Whites.

Anand, the NIIT MindChampion was in full flow on Monday and played in his natural aggressive side. It was a fantastic effort by him as one seldom comes across a decisive miniature less than 20 moves in World Championship games. What is more important is the way Anand shrugged off yesterday's defeat and would definitely be enjoying a sychological edge and to a certain extent some peaceful sleep and rest on the free day.

Later at the Press Conference Anand commented "I had the same thought as Boris that I had to go 17.Qf4 then I refined it to 17.Qf2." of the final position while Gelfand admitted "I just didn't see the last move 17.Qf2"

The theoretical discussion in the Grunfeld did continue today, which incidentally has been Gelfand's pet defence so far in this event. Gelfand deviated rather early on the third move from their third game in this Match and the position was more like a Benoni..

Gaining confidence after yesterday's victory Gelfand tried to provoke Anand on the King side but the Indian did not take the bait. An invitation to swap bishops on the 8th turn by Gelfand was rather surprising which Anand unhesitatingly accepted. Another sharp move by Gelfand on the 10th turn and Anand was equal to the challenge.

By the 12th turn Anand appeared distinctly better and a wrong queen move on the 14th turn would have Anand smelling victory! Gelfand's queen ventured into Anand's territory and it was probably too late for the Challenger to realize that there was no way out for her, prompting an immediate resignation.