Magnus Carlsen was at his best in demolishing Nakamura who played the Sicilian Kalashnikov as black. Nakamura was saddled with two knights on the edge of the board while Carlsen stuck to basics to develop a dangerous attack against the centralised black king. 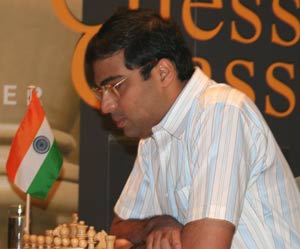 World champion Viswanathan Anand fought back from an inferior position to beat Erwin L'Ami of Holland to be joint second at the 75th Tata Steel chess tournament with one round to spare here at the De Moriaan.

With his fourth victory coming in the penultimate round, Anand rose back to joint second spot on eight points but a rampaging Magnus Carlsen of Norway ensured he would remain untouchable after butchering Hikaru Nakamura of United States.

The world number one took his tally to an unassailable 9.5 points and remains 1.5 points ahead of Anand and Levon Aronian of Armenia.

Peter Leko of Hungary and Sergey Karjakin of Russia share the fourth spot on seven points and Nakamura slipped to sixth position following his second loss in a row on 6.5 points.

Indian debutant P Harikrishna continued with a good performance and drew with Wang Hao of China to inch to six points and share the seventh spot alongside best performing Dutch Loek Van Wely.

The day provided four decisive games. Van Wely defeated Fabiano Caruana of Italy and Yifan Hou of China continued to be impressive at the expense of tail-ender Ivan Sokolov of Holland.

Anand's fourth victory in the tournament was quite dramatic. Playing the black side of a Sicilian Najdorf Anand was surprised early as L'Ami handled a side variation pretty well to equalise easily and then started to exert pressure by threatening to launch a queen side attack.

The world champion sought solace by going for trading of queens that eased up the pressure but black still controlled the vital central squares.

However, as the game progressed, L'Ami failed to find the best resources and lost a pawn while looking for counter play. Anand did not give another chance and wrapped the issue with fine technique thereafter.

Magnus Carlsen was at his best in demolishing Nakamura who played the Sicilian Kalashnikov as black. Nakamura was saddled with two knights on the edge of the board while Carlsen stuck to basics to develop a dangerous attack against the centralised black king.

It was a picturesque finale when white had two pawns on sixth rank in a mere 31 moves.

Harikrishna employed the English opening and Wang Hao restored the balance in a reverse Sicilian. The Indian had a minuscule advantage after the queens changed hands but soon Wang Hao reached a balanced rook and pawns endgame which was just a draw.

In the final round, Anand will take on Wang Hao as black and Harikrishna faces wounded Nakamura. For Anand it's a battle for the second place and if Harikrishna draws it will be an excellent result for him with a fifty percent score in the maiden appearance in a category-20 super tournament. Carlsen will fight it out with Anish Giri.

At stake is a 14-year-old record (10/13) set by former Guru Garry Kasparov. If Carlsen beats Giri, he will be the first player to score 10.5 points here.