Fresh from some strong performances including a recent victory in the Politiken Cup with a whopping 9/10 score, Negi proved that his warm up tactics before the World Cup were perfect as Kryvoruchko proved no match. 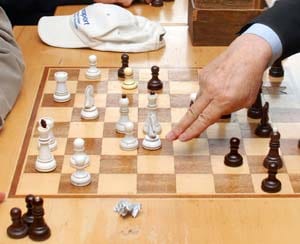 World's second youngest ever Grandmaster Parimarjan Negi of India outplayed higher-ranked Yuri Kryvoruchko of Ukraine in the first round of the World Chess Cup which began here.

Fresh from some strong performances including a recent victory in the Politiken Cup with a whopping 9/10 score, Negi proved that his warm up tactics before the World Cup were perfect as Kryvoruchko proved no match.

It turned out to be a mixed day for the Indians in the first round of this knockout event as B Adhiban held higher ranked Grandmaster Evegny Alekseev to a draw while Krishnan Sasikiran drew easily as black against Romanian Grandmaster Constantin Lupulescu.

Indian champion G Akash, however, lost his first game of the two-game mini-match against Fabiano Caruana of Italy. Akash now needs a victory in the return game to stay in the hunt in the 128-players event.

Negi was the star of the day as he almost effortlessly outplayed Kryvoruchko in all departments of the game. Playing the black side of a Sicilian Scheveningen, Negi used a new idea that unsettled the Ukrainian early and showed precise technique to go one up.

Kryvoruchko now faces a daunting task to make a comeback as he has to win with black pieces.

Adhiban employed the Sicilian Taimanov and was happy to get the Fianchetto variation on board. Soon as the middle game arrived, Alekseev went for a direct attack on the king side only to realise soon that it was not intimidating enough.

Adhiban could have pressed for more but given his maiden appearance in the World Cup, a draw with black against much higher ranked Alekseev was a good result.

Lupulescu could not get any advantage with his white pieces against Sasikiran who surprised with his choice of Queen's Indian defense. It was still a middle game but the Romanian was not sure of his chances when he proposed the draw after just 19 moves.

Akash faced the French defense and reached a level endgame against second seed Caruana. However, the tactics backfired as Caruana turned out to be tough customer in endgame too and broke through with his centralised passed pawn. The game lasted 41 moves.

The World Chess Cup is a part of the next World Championship cycle with a total prize pool of USD 1.6 million. The first round losers take home USD 6000.