Magnus Carlsen got the required half-a-point after the tenth game of the world chess championship against Viswanathan Anand ended in a draw. Anand had held the world crown since 2007.

Magnus Carlsen is the new world chess champion. After game No. 10 of the world championship ended in a draw in Chennai on Friday, the 22-year-old Norwegian got the required half-a-point needed to reach 6.5 points and dethrone India's super Grandmaster Viswanathan Anand. The world championship is a 12-game affair over 20 days and the first to reach 6.5 points wins the series. This is Carlsen's maiden title. After suffering his third loss in the ninth game on Thursday, Anand (3 points) needed three wins in-a-row to force the tie-breaker, but it was not to be. Anand played with Black on Friday and started on an aggressive note in a bid to crash through Carlsen's defenses. But world No. 1 Carlsen defended well in a whirlwind first hour that saw the players making 21 moves each. The second hour saw just seven moves as both players backed their chances to win a full point. (5th game was turning point: Anand)

The first time control was reached after 41 moves as a gritty Anand gave it all but Carlsen seemed to be in a slightly better position. All three results looked a possibility in a long and gripping endgame where Carlsen looked desperate for a win. The draw was finally agreed after 65 moves after an almost a five-hour battle. The final scoreline 6.5-3.5 in Carlsen's favour.

The Norwegian sensation needed a draw after scoring his third win over reigning champion Anand on Thursday. Carlsen, the current world number one, won the crucial ninth game after Anand resigned following an engrossing 56-move match that lasted three hours and 21 minutes. Carlsen had also won the fifth and sixth games and drawn the other six. (Anand cracked under pressure: Carlsen)

Anand, who at 43 is 21 years older than his rival, has held the world crown since 2007. On Thursday, he conceded it will need a miraculous turnaround to keep his chances alive. "I need three wins in-a-row," he said. "I can try but the situation does not look very good."

For more than three years, Carlsen has been the uncrowned king of chess. The Norwegian has been the No. 1 player in the world almost continuously since January 2010. Carlsen, playing with white pieces on Friday, was definitely in an advantageous position against Anand, who has been rather subdued in this championship. 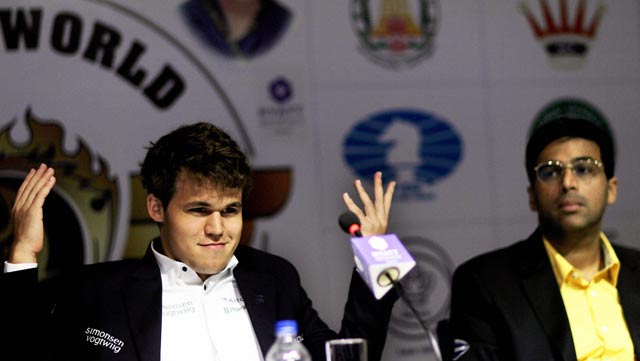 The total prize fund for the title clash is about $2.24 million with the winner getting 60 per cent and the loser taking home the rest.

Prominent quotes after the match:

Magnus Carlsen - "Vishy has been the world champion for so long. The greatest. Very happy to get the better of him.

I would like to take some responsibility for Anand's mistakes. That's for sure.

People crack under pressure in world championships. History has shown that.

I didn't feel too much of psychological warfare. All matches were decided on the board.

This win will be very good for chess in Norway. The matches were shown on TV. That's good."

Viswanathan Anand - "I congratulate Carlsen. He poked me into making mistakes.

The fifth game was a heavy blow. It got worse and worse. I guess when it rains, it pours.

I was just trying to keep playing and then started making mistakes. Made blunders."