Grandmaster and highest rated in the fray, Koneru Humpy crashed out of the World Women's Chess Championship after failing to capitalise on her chances against Natalia Zhukova of Ukraine in the second game of the second round that concluded here. 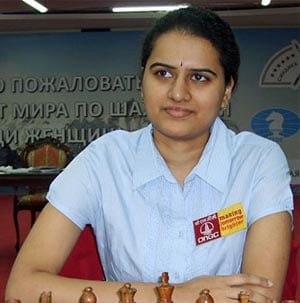 Grandmaster and highest rated in the fray, Koneru Humpy crashed out of the World Women's Chess Championship after failing to capitalise on her chances against Natalia Zhukova of Ukraine in the second game of the second round that concluded here.

After losing the first game of the two-game mini-match, the Indian faced a daunting task of winning with black in the return game and when the chance came to turn the battle in her favour, Humpy stumbled and went on to lose her second game in a row against Zhukova.

The other remaining Indian in the event -- D Harika --however kept herself in contention with some smart work against Elina Danielian of Armenia that saw her through to the pre-quarterfinal stage of this knock-out championship.

Sitting with a cushion of a full point lead having won the first game, Harika played solidly and took a draw in a better position which was enough to secure her entry to the next round.

In the shocker of the day, experienced Monika Socko of Poland defeated defending champion Yifan Hou of China to level scores.

Not many had given any chances to Socko to score a comeback victory but a temporary loss in concentration from a level position meant that Yifan will now have to fight it out in the tiebreak games of the second round.

Humpy was the only one to lose by a 0-2 margin. The reason for that was simply that the Indian wanted to win at any cost. It was a King's Indian vide transposition and though the position looked optically favourably for Zhukova in the middle game it was not easy to find plans.

Sensing that quickly enough, the Ukrainian came with a sacrifice for two pieces for a rook that again looked optically promising but favour black and Humpy looked on top and set for a comeback.

However as the game progressed, Humpy miscalculated and misjudged almost everything. Her 29th move was a blunder, letting Zhukova back in the game, and subsequent manoeuvres left white slightly better in the complicated endgame. The final blunder by Humpy came on the 39th move and Zhukova won four moves later.

Danielian went for the sharp Four Pawns attack in the King's Indian defense by Harika and found some advantage in the middle game. However, wily manoeuvres by Harika ensured she remained in the game while exchanging some pieces at the same time and once the dust subsided, it was just a level position.

Looking for more, Danielian tried hard and gave up an exchange giving Harika more chances to win, but the Indian quickly liquidated further and offered a draw where she may have won with some hard work.

Preserving energy sometimes is known to be good in these tough knock-out formats and this is what Harika had in mind. Danielian signed her exit papers after 47 moves.