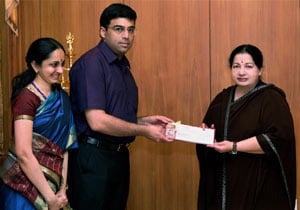 Anand, along with his wife Aruna, called on Jayalalithaa at the state secretariat where she complimented the world champion for his achievement.

The Chief Minister had earlier sent a letter to Anand saying that he had brought laurels both to Tamil Nadu and India and announced a reward of Rs two crore.

Describing his meeting with the Chief Minister as "incredibly nice", Anand thanked her for the efforts of the state government in promoting chess among the students.

Thanking Jayalalithaa for the cash reward, Anand also backed the idea of corporate support for chess, saying it will help the sport.

Anand defeated challenger Boris Gelfand of Israel in a tense rapid chess tie-breaker to win the World Championship crown for the fourth time in a row in Moscow on May 30. The state government has brought out a booklet in honour of Anand, fondly called as Vishy Anand, detailing his achievements from 1986 to 2012.

The information material, published by Sports Development Authority of Tamil Nadu (SDAT), termed him as the "Pride of Chennai -- The Greatest Chess Player", and praised him for bringing an "Anand Wave" to inspire more Indians take to the game.