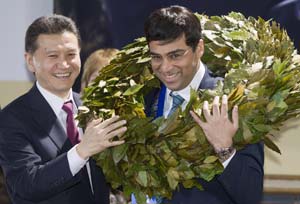 In recognition of his achievement in retaining the World Chess Championship crown, "Chief Minister J Jayalalithaa is pleased to honour him by sanctioning a cash reward of Rs. two crores," a state government release said on Friday.

Anand defeated challenger Boris Gelfand of Israel in a tense rapid chess tie-breaker to win the World Championship crown for the fourth time in a row in Moscow on May 30.

Jayalalithaa had on Thursay hailed Anand's feat, saying he had brought laurels both to Tamil Nadu, his home state, and India.