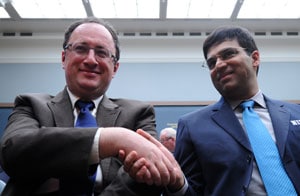 "The State of Israel is a 'brain superpower' and chess is a game of brain. Thanks to people like you, we shall turn Israel into a chess superpower," Netanyahu, himself a chess enthusiast, told Gelfand during a meeting on Sunday in the presence of Culture and Sports Minister Limor Livnat.

The two leaders congratulated the Israeli Grandmaster for his achievement, despite failing to unseat Anand as the world champion, and promised to increase chess funding.

Netanyahu also said he had watched the matches in between meetings.

"I am sure that many Israelis are proud of your achievement and that many more Israelis love the game of chess because of you," he told Gelfand.

During the meeting, Livnat announced the government's intention to invest NIS 1 million in dozens of chess clubs, in addition to the ongoing funding of NIS 1.2 million.

The Culture and Sports Minister added that an additional NIS 1.2 million will be allocated to the European Chess Club Cup, which will be held in the Red Sea resort city of Eilat in October.

Israel is set to host 80 teams from more than 50 countries.

"It's important that we continue to develop this field and initiate international competitions that will see Israeli chess players in getting recognition," Gelfand told the two.

He also complimented Netanyahu, with whom he had once played a game, for his love of chess.

"It's so nice to see a prime minister that plays chess. I'm sure that abilities in chess help in the decision-making process," the Israeli Grandmaster said.

Gelfand lost the FIDE Chess World Championship to Anand in the tie-breakers after the two players were tied 6-6.