Magnus Carlsen won three games and forced a seventh draw on Friday to achieve the victory mark of 6.5 points in Viswanathan Anand's home city of Chennai.

Indian media on Saturday said a new world order had dawned after local favourite Viswanathan Anand was outplayed by Norwegian prodigy Magnus Carlsen in the battle for the world chess title.

Carlsen, the 22-year-old reigning world number one, won three games and forced a seventh draw on Friday to achieve the victory mark of 6.5 points in Anand's home city of Chennai, the capital of southern Tamil Nadu state.

"His (Carlsen) brand of fighting, aggressive chess may also mark a new era," the English-language daily said, wondering if Anand would "try and earn a right to challenge Carlsen late next year".

Anand, who at 43 is 21 years older than his rival, lost the title he has held since 2007 despite a last-gasp fight in an attritional 130-move game on Friday that lasted four hours and 45 minutes. (Anand cracked under pressure: Carlsen)

Carlsen played four draws early in the tournament to counter Anand who could never recover from blunders he made in the crucial fifth game.

The Times of India said that with Anand's comprehensive defeat, an era had ended in chess.

The paper said it was "poetic justice" that Carlsen heralded the new era in a country where the game of 64 squares has its origins.

The Indian Express said with Carlsen's triumph, "the world of chess is on the threshold of a generational change".

"It was not just Carlsen's dominance... but what he represents that has fans excited," it wrote. (Read story) 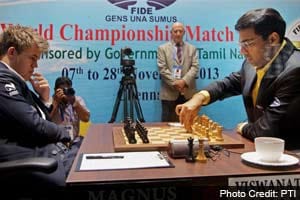 Carlsen missed by a few weeks becoming the youngest world champion, a record set by his one-time coach Kasparov in 1985.

The last Westerner to hold the world champion title was US legend Bobby Fischer who relinquished it in 1975.

The tournament was widely reported across Indian media which aired the matches live on television, building an unprecedented hype in a country where cricket is the number one sport.

The vernacular press also gave wide coverage to the championship with daily and detailed reports of their battle featuring on the top of the sports pages.

The Express attributed some of the excitement to the youthful personality of Carlsen, which it said, set him apart from past champions.

"Young and marketable, Carlsen is the antithesis of the traditional image of the reclusive and recondite chess genius," the newspaper said in a front-page report.

Quoting Russian legend Garry Kasparov, it said: "A win for Carlsen is also a win for the chess world."