Former world champion Viswanathan Anand and Michael Adams of England are tied for the top spot in the prelims on 12 points each under the soccer-like scoring system that gives three points for a win and one for a draw. 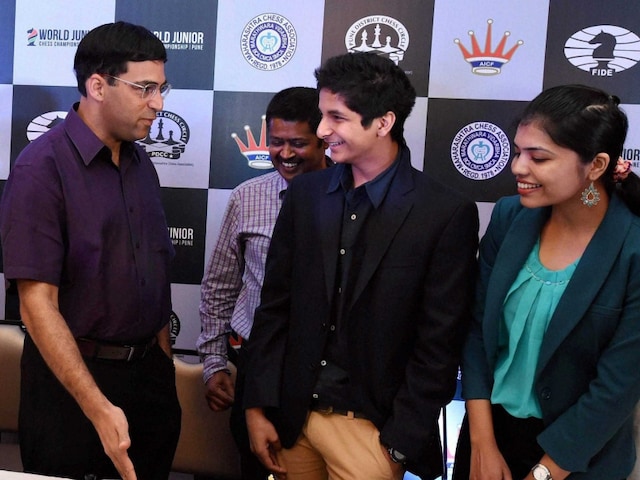 After making it to the knockout stage, former world champion Viswanathan Anand settled for a draw against co-leader Michael Adams of England in the sixth and final preliminary game of London Chess Classic in London on Saturday.

Anand and Adams are tied for the top spot in the prelims on 12 points each under the soccer-like scoring system that gives three points for a win and one for a draw.

Both Anand and Adams scored three victories and three draws apiece to make it to the knockout stage of this 150000 prize money tournament.

The final day of the prelims turned out to be easy for Anand as he just made sure of a berth in the knockout stages with two draws. In the fifth round, the Indian ace had shared the point with Andrei Istratescu of France.

In the quarterfinals, Anand will now meet his 2008 world championship challenger Vladimir Kramnik of Russia who finished second in the 'B' group that was won by compatriot Peter Svidler.

Svidler will take on Adams in another quarterfinal that will be played as a two-game mini-match to be played with 25 minutes for both players and a ten seconds increment after every move is made.

In the event of a tied result after two games, two games with ten minutes each will be played and if the deadlock continues an Armageddon game with five minutes to white and four to black will be played to determine the winner.

In the Armageddon, black will move to the next round even with a draw.

In other group stage clashes Hikaru Nakamura of United States topped the 'C' group after a last round drama saw Boris Gelfand of Israel losing to Gawain Jones of England. The result was inconsequential as Gelfand still made it to the knockout stage but he will now meet Group 'D' winner Fabiano Caruana of Italy.

Caruana, in fact, was the pick of the lot showing great results in the prelims. The Italian scored a very impressive 16 points winning five and conceding just one draw in the six games he played. English Nigel Short came second in this group and will now meet Nakamura.

In the open section being held simultaneously, Grandmaster and former world junior champion Abhijeet Gupta elevated himself to the joint second spot on 5.5 points with just two rounds to come.

The other Indians in with a chance in the open are Grandmaster M Shyam Sundar and International Masters Eesha Karavade and Tania Sachdev who all have five points in their kitty.

Group B: Sadler drew with Svidler; Rowson drew with Kramnik