Russian grandmaster-turned-opposition activist Garry Kasparov, who supported the jailed Pussy Riot members, can be jailed over a clash with police where he allegedly bit a policeman. 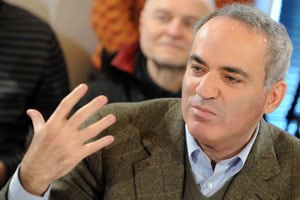 Russian grandmaster-turned-opposition activist Garry Kasparov, who supported the jailed Pussy Riot members, can be jailed over a clash with police where he allegedly bit a policeman.

Police said the 49-year-old Kasparov bit on the finger one of several officers dragging him away from a Moscow court where three Pussy Riot members were convicted Friday over an anti-Kremlin "punk prayer" at an Orthodox Christian cathedral.

The accusation can land Kasparov in jail for five years on charges of attacking a police officer on duty, the RBC Daily news website said.

Moscow police confirmed they were preparing to hand over the case to the Investigative Committee, Russia's analogue of the FBI, which will conduct a probe into the matter.

Kasparov claimed police arrested him for no reason as he was giving an interview, twisting his arms and kicking him in the crotch on the way to the police van. He said he would sue police over the incident.

Kasparov also denied biting anyone and said the officer in question, Denis Ratnikov, could have run afoul of a police dog.

A police spokesman said the force was willing to conduct an examination to compare Kasparov's bite to that of their service dogs.

City police never specified why the activist was detained. More than 50 people were held Friday by the Khamovnichesky district court, where the Pussy Riot members were given jail terms of two years for hooliganism and inciting religious hatred.

Kasparov, who retired from chess in 2005, is one of the most ardent critics of President Vladimir Putin. He has supported Pussy Riot, who claim they were punished by the Kremlin for mocking its alliance with the church, which endorsed Putin's presidential bid.