Viswanathan Anand doesn't want to reflect on the year gone by and says his main focus right now is to prepare for the World Championship in Russia where he will face Boris Gelfand of Israel next year. 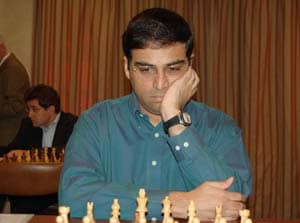 Viswanathan Anand doesn't want to reflect on the year gone by and says his main focus right now is to prepare for the World Championship in Russia where he will face Boris Gelfand of Israel next year.

The 42-year-old world champion said he will have to analyse his game to find out his weaknesses but added that it was not the right time as he gears up to defend his world title at the historic Tretyakov State Gallery in Moscow in May.

"I started off well this year, got good results in TATA steel. I did consistently well in rapid event but somehow in the seven hour events I was getting neutralised," Anand said on the sidelines of a NIIT felicitation program here.

"It was a bit of a blow and I definitely have to analyse it. Probably it is a mixture of preparation and caution slipping into the move.

"I have to find exactly what is the root cause but that is not the task now. I can't think about tournaments now because world championship is round the corner and so I will focus on that for the moment. I will just be training for the world championship," he added.

Anand, who has won the Leon Chess Tournament, Botvinnik Memorial at Moscow and Corsica Masters Knockout (Rapid) tournament this year, wants to take a break before starting his preparation for the World Championship in the new year.

"Right now I will take a break, I have come off three tournaments and want to spent time with my son and in new year I will start my training, there is a lot of months, I will train 2-3 months and then go for the championship," said Anand, who finished joint sixth in Tal Memorial, before ending the year with a joint fifth finish at London Classic.

Talking about his rival, Gelfand of Israel, Anand indicated that it would not be an easy task.

"I think Gelfand's style is close to Vladimir Kramnik then Veselin Topalov, they have a similar classical upbringing in chess, they don't do a lot of these hyper-morden stuff. They are not going to put their pieces in very unconventional places unless there is a good reason," Anand said

"But then Gelfend will have a lot of time to train so I have to anticipate all the moves which he might come up with, but Topalov, Kramnik, Gelfand and me - we are from a certain generation and our thinking process is aligned," he added.

Asked if his slump in form of late would affect his game, Anand said, "My job is to make sure that, I get over all the disappointments of this year and I am ready to play and give my best. It is a 12-game match and you have to do well there and I have to keep my moral good."

Anand said he can't afford to be complacent against Gelfand and hence need good preparation.

"We know each other well but then we don't know each other inside out and chess is always evolving, so it is not a fixed target ever. I am sure we will have enough new things to try in match, so it is double-edged, can't be complacent."

At 42, Anand is not getting any younger, but the Indian said he is not thinking about the upper limit as of now and would rather look to keep himself fit.

"I am not thinking beyond the World Championship now. The clock is ticking and I am not going to pretend that I don't see myself at 50 or 60 but now it is world championship and everything gets pushed to the back," he said.

"I think I can do a lot better as long as can keep fitness up and keep enjoying chess. A lot of things are coming up, technology aspects and I have to be ahead of them and if I keep enjoying chess it will not be difficult but of course there will be an upper limit but I believe that I can still play chess for quite sometime," he said.