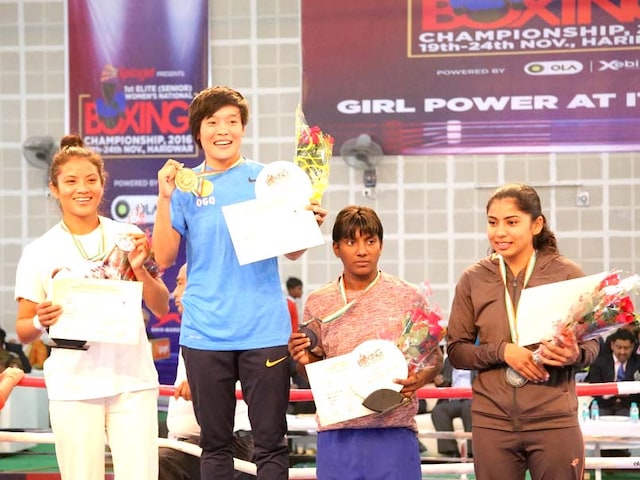 This is Sarjubala Devi's third straight gold medal at the nationals.© NDTV

Former World Championships silver-medallist Sarjubala Devi picked up her third successive National Championships gold even as some new boxers also made a mark in the aggressively-fought summit clashes on the final day of the event in Haridwar.

The 23-year-old Sarjubala, among the few accomplished names left in fray on the final day, once again endured a tough one, this time against local favourite Krishna Thapa.

Incidentally, Sarjubala had beaten Thapa in the final of the 2011 National Championships as well.

A partisan crowd firmly behind Thapa, she took the fight to Sarjubala. However, the Manipuri girl relied on her accuracy in connecting punches to negate Thapa's aggression. In the end the bout was unanimously scored in favour of Sarjubala.

"This is my fourth National gold overall and third consecutive. I have gone through a really tough campaign to get it. I did not get a single bout which one can call easy. All my bouts were draining. I had beaten Krishna in 2011 too and she is a tough nut. It is the first National Championship being organised by the new federation and I was desperate to make an impression," Sarjubala, a former world junior silver-medallist, told PTI.

The final day was not without upsets as two-time World bronze-medallist Kavita Goyat (Haryana) was stunned 1-4 by former Asian bronze-winner Seema Poonia of RSPB in the heavyweight 82kg category final. Seema, for whom it was her first National gold, stood out for her clean punches while Kavita looked sluggish in the bout.

However, former Asian Games bronze-medallist Kavita Goyat gave All India Police its lone gold of this edition. She defeated Arunachal Pradesh's Rumi Gogoi 4-1 to collect her fourth gold medal in the National Championships.

The evening was also about some fresh talent announcing their arrival on the big stage. One such standout performer was Punjab's Simranjit Kaur, who took the gold medal in light welterweight 64kg category.

The 21-year-old former World Youth bronze-medallist was up against a rampaging Jyoti from Haryana.

The strongly-built Ludhiana girl had the crowd up on its feet by exhibiting some thundering jabs against her rival. The youngster fought through despite getting bloodied nose in the third round.

Jyoti's power-packed attacks did little to unnerve Simranjit and she struck some telling straight blows to force an eight-count on the Haryana girl thrice in the final two minutes.

"My sister was a boxer, that's why I took to boxing. Today when the crowd got behind me, it encouraged me to push myself harder. This is my first National Championships gold and I am so glad that I could give my best in the final," said an exhausted but excited Simranjit after the bout.

The bantamweight (54kg) gold went to Haryana's Soniya, who defeated local favourite Kamla Bist. Bist, who had caused the tournament's biggest upset by defeating World silver-winner Sonia Lather was no match for the swift-moving and crafty Soniya she came across today and lost 5-0.

The feisty Simranjit was adjudged best boxer of tournament, while Uttarakhand's gritty Krishna Thapa settled for the best contender award.