Muhammad Ali flattened George Foreman, the previously undefeated champion at 2:58 of the eighth round at Kinshasa in what was then Zaire, but is now the Democratic Republic of Congo 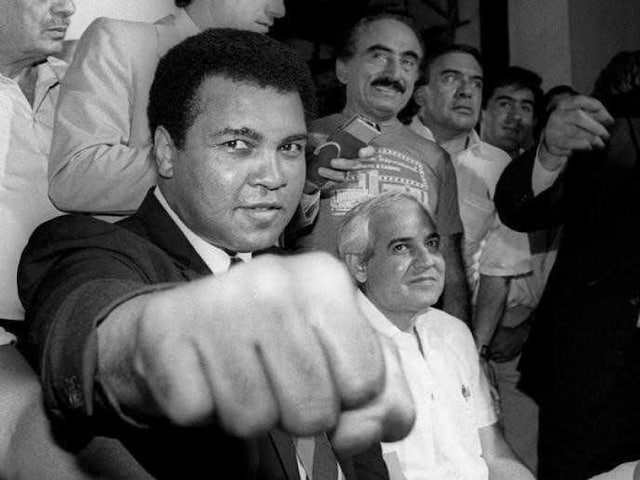 Muhammad Ali was diagnosed in 1984 with Parkinson's disease.© Reuters

Boxing icon Muhammad Ali, known simply as "The Greatest," captured the greatest victory of his career in 1974 by knocking out George Foreman to win the "Rumble in the Jungle."

Ali flattened the previously undefeated champion at 2:58 of the eighth round at Kinshasa in what was then Zaire but is now the Democratic Republic of Congo.

In addition to an epic effort that displayed his boxing gifts, the triumph touched upon the role of Ali -- who died on Friday at age 74 -- as a cultural hero.

He reclaimed the world heavyweight crown he had not held since being banned from boxing in 1967 for refusing to fight in the Vietnam War, a conviction overturned by the US Supreme Court in 1971.

Using his now-legendary "Rope-A-Dope" strategy, Ali played upon fears that at 32 he might be seriously overmatched by the larger, more intimidating and younger Foreman, the 25-year-old who entered the ring at 40-0 with 37 knockouts.

Ali leaned on the ropes and covered up while Foreman pounded away at him, his deflected blows doing minimal damage while spending precious energy.

Ali taunted the champion into swinging away as the rounds wore on that October night while the crowd chanted "Ali boma ye" (Kill him, Ali).

Foreman began to tire while Ali started landing fast jabs and hard punches. In the eighth round, Ali connected with a lightning-bolt right hand and Foreman stumbled to the canvas, beaten for the first time.

"Muhammad amazed me," Foreman said. "I'll admit it. He out-thought me. He out-fought me. That night, he was just the better man in the ring."

In the run-up to the fight, Ali uttered some of the most magical of his rhyming quips. Among them:

# "Float like a butterfly, sting like a bee - his hands can't hit what his eyes can't see."

# "I'm so fast that last night I turned off the light switch in my hotel room and got into bed before the room was dark."

# "I done something new for this fight. I done rassled with an alligator. I done tussled with a whale. I handcuffed lightning, I thrown thunder in jail.

# "Only last week I murdered a rock, injured a stone, hospitalized a brick. I'm so mean I make medicine sick."

Ali was diagnosed in 1984 with Parkinson's disease, which ended the snappy banter that had been his trademark.

Foreman, who needed 20 years to regain the crown, could not deny Ali's greatness.

"Muhammad Ali has always been bigger than boxing," Foreman said in a 2014 essay on his website.

"I say Ali was the greatest man because there has never been a man so young and so good at what he did, give up so much," he added.

"I say boxing is too small for Muhammad Ali. He changes the very world. No other boxer could do that."