Vikas Krishan, former World Championship bronze-medallist, will take on Kenya's Nickson Abaka in an International Boxing Association (AIBA) Pro Boxing fight. If the Indian wins he will get an extra opportunity to q8ialify for Olympics 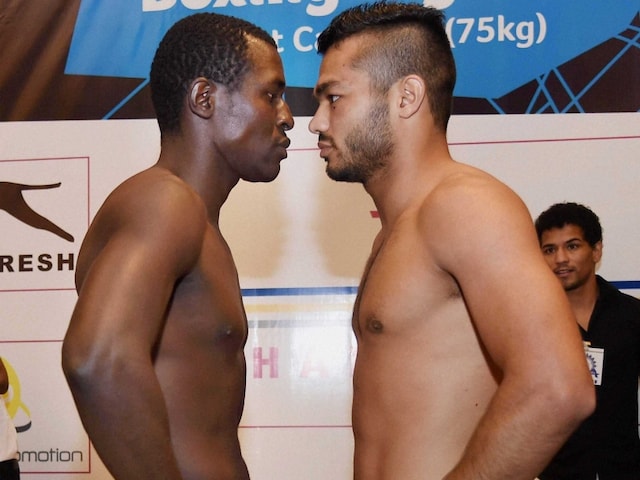 Vikas Krishan during the weigh-in ahead of his pro bout with Nickson Abaka.© PTI

The world No.6, who was an Asian Games gold-medallist, will fight it out in a six-rounder at a Noida mall. The bout is being conducted under the aegis of the International Boxing Association (AIBA) and the Professional Boxing Organization of India (PBOI).

"This is a great opportunity for me and I will make the most of it," said Vikas ahead of the bout, within hours after which he would be leaving for an Olympic Qualifying Tournament in Azerbaijan with a 10-member team.

AIBA Pro Boxing's Managing Director Mirko Wolf said the bout is the world body's way of extending a helping hand to India at a time when the country is struggling on the administrative front in the absence of a national federation.

"India has huge potential and we know this. At this time, we thought what is it that we can do to help? That's how APB was brought here. I know Vikas, he is a brilliant boxer and this bout gives him a chance to be eligible for the Olympic qualifiers. We thought a talented boxer like him deserves a chance, so we are here," Wolf told PTI.

"By bringing AIBA Pro Boxing to India, we are taking boxing to a new level in India, he added.

By fighting on Saturday, Vikas would be eligible to compete in the final Olympic Qualifiers in Venezuela and the Indian said he would definitely make the trip even if he books his berth in the Azerbaijan event.

"Going to Venezuela would be good for exposure. It will help me test myself against stronger guys. So I would be keen to go even if I qualify in Azerbaijan," Vikas said.

Obaka, who is a former World Military Games bronze-medallist, said the Indian should brace up for a tough contest.

"I have been in India before, it's always great to be here. I will give my best tomorrow and I can promise that Vikas won't have it easy," he said.

The PBOI is being aided by Delhi Boxing Association chief Rohit Jain in the conduct of the bout.