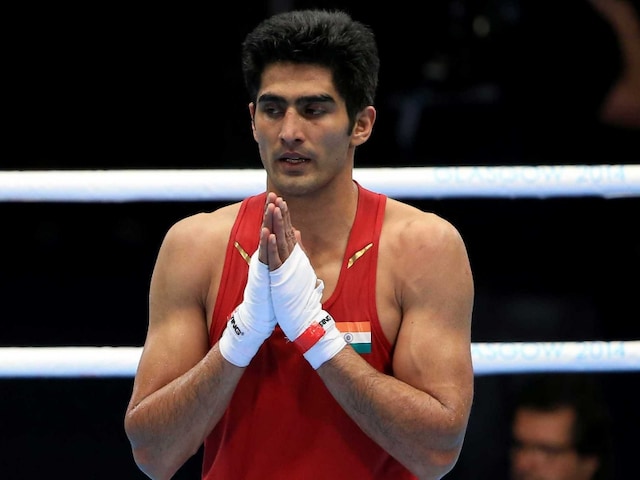 Vijender said due to the current logjam, only three boxers from India qualified for Rio Olympics.© AP

Concerned about the state of Indian boxing right now, professional star Vijender Singh on Wednesday said action should be taken against those who are responsible for the current logjam due to which only three pugilists from the country qualified for the 2016 Rio Olympics.

Shiva Thapa (56kg), Manoj Kumar (64kg) and Vikas Krishan (75kg) are the three to have qualified for the Olympics this time, a marked drop from the eight who had made the cut for the London Games in 2012.

"That's very bad. I met Prime Minister Narendra Modi and explained each and every thing, but he is a busy person so he said 'just email me each and everything', so I just followed him, but this is really bad and I think we should take strong action (against) those who are responsible for this thing.

The 30-year-old was on a visit to the Jamnabai Narsee School in suburban Vile Parle to promote the fight in Delhi, along with Bollywood actor, John Abraham.

"Somewhere we are lacking something. We don't even have a boxing federation," the 2008 Olympic Games bronze-medallist told reporters here.

India have been without a federation for a year now and little has been done to form a new body despite repeated warnings from the International Boxing Association (AIBA).

"Shiva, Manoj and Vikas are all experienced. They were with me in the London Olympics (2012), and I am hoping from all the three that they win medals, but from Shiva, I have more (hope). He is the best of the three," he added.

Shiva last year became only the third Indian boxer ever to clinch a World Championship bronze before winning a silver medal and an Olympic quota berth at the Asia/Oceania Zone Qualifiers in Qian'an, China.