Vijender Singh unleashed a barrage of punches on Poland's Andrzej Soldra. The referee finally stepped in and brought an end to the fight in the third round 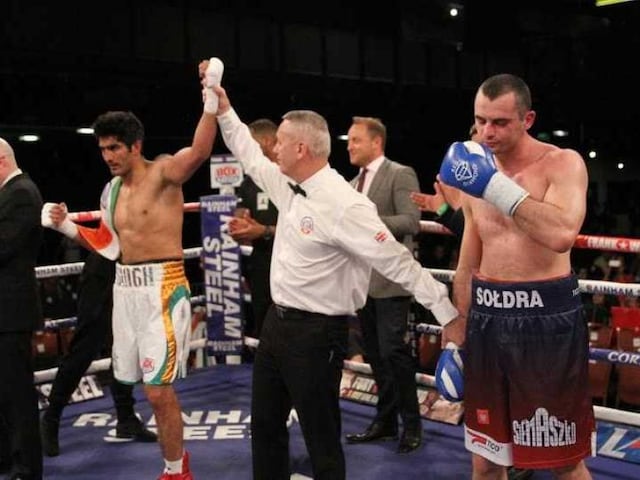 Vijender Singh registered his sixth straight professional boxing victory with a Technical Knockout win in the third round over Poland's Andrzej Soldra on Friday at Bolton's Marcon Arena.

Vijender made a blistering start in the first round, connecting multiple times with his left jab before flooring his opponent with a thunderous right hook.

Soldra did manage to hold on till the end of the round but only just.

The second round was much the same with the Indian landing some telling blows which left the Polish fighter reeling back a bit. Soldra, however, managed to get in some punches but they did nothing to deter Vijender.

Both fighters came out swinging in the third but it was Vijender, who landed the big blows. With Soldra wobbling, Vijender went for the kill and unleashed a flurry of punches, which went unanswered.

The referee finally stepped in to bring an end to Soldra's struggle in the ring, giving Vijender his sixth consecutive win.

The Olympic bronze medallist had won all his previous pro bouts via Technical Knockouts as well. His previous fight, against Frenchman Matiouze Royer, was the longest of his fledgling pro career, lasting five rounds.

This was Vijender's last fight before he makes his India debut next month. Vijender will be fighting it out for the WBO Asia belt against a yet-to-be-named opponent in New Delhi on June 11.

Soldra came into the fight with a record of 12 wins -- with 5 knockouts -- from 16 fights. The 30-year-old had the edge in experience over Vijender with 81 rounds under his belt.