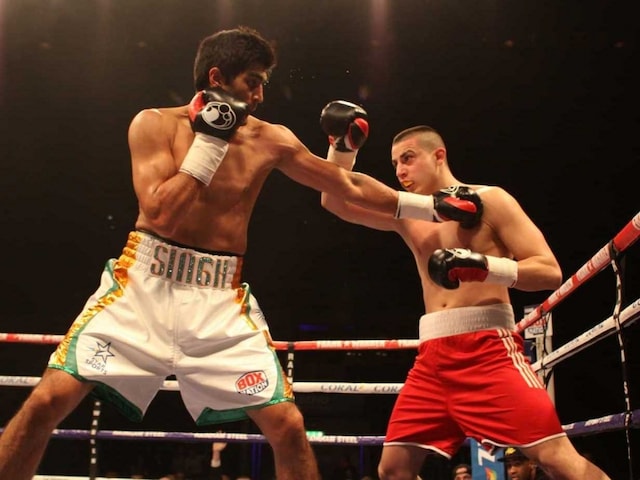 Before Vijender Singh's fourth match, his opponent, Alexander Horvath had already upped the ante. The Hungarian had said that he had resorted to dining on snakes' blood to attain "supernatural powers". He added that he would give a lesson in boxing to Vijender and that there was no way he could be beaten.

However, all the talk failed when it came to action day as Vijender continued his winning spree in the professional arena with an easy win over Horvath at the Liverpool Echo Arena here on Saturday evening. (Highlights)

As with his previous professional bouts, the Indian dominated the fight. The Hungarian forced to retire around one minute into the third round after a powerful punch from Vijender hit his left shoulder.

This was Vijender's fourth win in a row in professional boxing in the middleweight (75kg) category - all of them by knockout or technical knockout.

In his debut bout, Vijender defeated English boxer Sony Whiting by technical knockout in the third round. In his second bout, Dean Gillen, also of England, did not even last for one full round as the Haryana boxer knocked him out in the last minute of the opening period.

Bulgaria's Samet Hyuseinov went down in the second round of the third fight as Vijender registered another technical knockout.

Saturday's bout was important as it is the last before Vijender appears in his first pro bout in India in July. The bout was scheduled around a month earlier, but it was postponed due to some technical reasons.

Horvath was the more aggressive boxer to start with, while Vijender was a bit tentative. As the opening round wore on, the Indian seemed to get the measure of his opponent's strategy, easily ducking the punches while landing some powerful blows of his own.

Although Horvath showed more urgency, he was unable to pierce Vijender's defence and in his efforts to force the pace, often walked into the Indian's counter punches.

In the closing stages of the first round, the Indian landed a power-packed shot which knocked out the Hungarian's gumshield.

Surprisingly, Horvath seemed a bit exhausted in the second round. Vijender also adopted a cautious approach as the bout became a bit of a slow affair, much to the displeasure of the extremely vocal Indian supporters in the arena.

Most of Horvath's punches were a bit aimless while Vijender was more composed and better with his accuracy.

Both boxers came out swinging at the start of the third round. But a right from Vijender caught Horvath on the left shoulder, forcing the Hungarian onto his knees.

With the referee giving the count, Horvath refused to carry on with the fight, as Vijender and the sizeable Indian contingent among the crowd erupted with joy.

"I got an extra month of training. He was a more experienced boxer (than the previous opponents) so I am happy. I don't know what happened to his arm. Maybe he is making excuses," Vijender said after the fight.

"This is my fourth professional win, so I am doing good."