Vijender Singh met Sachin Tendulkar and invited him for his first professional home bout, which scheduled to be held in New Delhi on June 11. 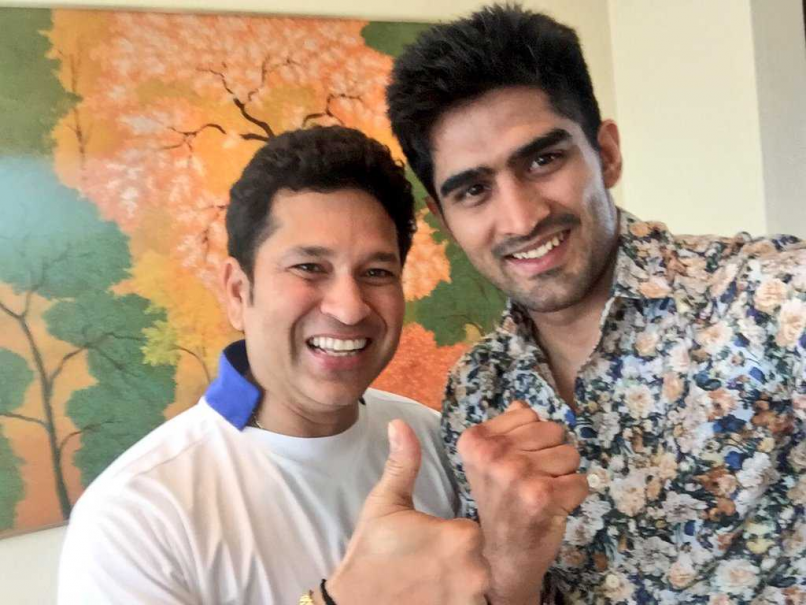 Vijender, who has won all his four fights since turning pro last year, is on a short 10-day Holi break in India before his next bout on April 30 in London. (Vijender Singh's Next Pro Bout Postponed to April 30)

The Beijing Olympics bronze medallist, who is a huge fan of Tendulkar, met the batting great in Gurgaon and invited him for his first professional home bout scheduled to be held in the capital on June 11.

During the meeting that lasted half an hour, Vijender spoke about the structure and future of professional boxing.

"Meeting the legend Sachin Tendulkar is always an inspiration for any of the sportsperson. I would like to thank Sachin sir for giving me time out of his busy schedule and I have invited him for my WBO Asia title fight scheduled to be held on 11 June in Delhi," said Vijender.

"I am happy that Sachin follows boxing and he asked me about my training regime of pro boxing. He was happy the way my professional career is progressing, he asked me about the structure of professional boxing in other countries. Meeting him was really a big motivation for me and he assured me of full support for my all future bouts," he added.

Vijender is no longer a part the amateur boxing circuit but has expressed concern about the shambolic state of its administration in India. The star pugilist, on Wednesday, took up the issue with Prime Minister Narendra Modi in a meeting.

Comments
Topics mentioned in this article
Boxing Vijender Singh Sachin Ramesh Tendulkar
Get the latest Cricket news, check out the India cricket schedule, Cricket live score . Like us on Facebook or follow us on Twitter for more sports updates. You can also download the NDTV Cricket app for Android or iOS.