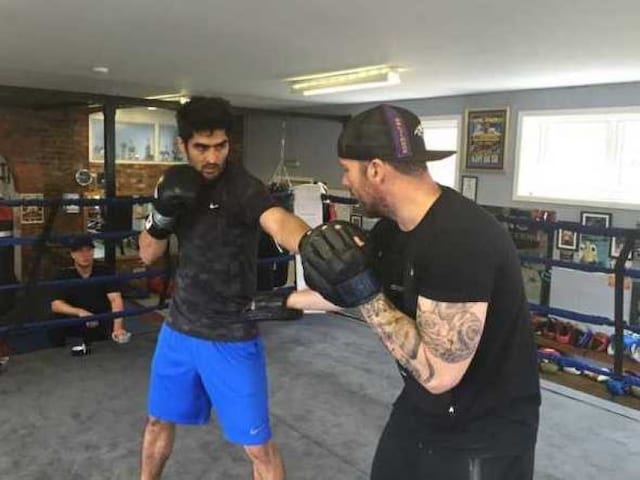 Vijender Singh is confident of overcoming Kerry Hope in the title bout.© NDTV

Undefeated in his six fights so far, Vijender is currently training hard in Manchester under globally acclaimed trainer Lee Beard.

"With less than three weeks to go for my maiden title fight, am really excited to compete in front of my home crowd. Competing in front of my own people will be a very big moment for me and I don't want to lose this chance," the 30-year-old, who will face Kerry at Thyagaraj Sports Complex in New Delhi, said.

"I have started high intensity training two weeks ago to compete in the first 10 rounder fight for Asia Pacific title and working hard to win this. I have seen videos of Kerry, he is a good opponent but I am training really hard to be ready for what my opponent has."

His training regime includes -- shadow boxing in front of a mirror which helps to perfect technique, and practice both offensive and defensive exercises, sparring between 12 rounds which enhances all facets of boxing skills and techniques, Floor Work that builds up strength, Pad Work which increases speed, coordination and timing.

His rival Kerry Hope, a former European champion, has openly challenged Vijender before this title fight, terming the Indian as an amateur and not in his league.

Vijender said: "If Kerry comes forward and throws shots then anyone who has done that in the past has got knocked out so if he leaves himself open my natural strength will play a big part. Every fight I go into I believe I will win. Doubt is the enemy. I believe he's not as strong as me and he's not training like I'm training.

"I have read his statement but don't want to react on this. All I can say is that I am preparing for 16 July and my punches will reply to overconfident Kerry Hope. I am confident of winning this game and making my countrymen proud."

Vijender said he wants to win this championship title not only for himself but also for his fans.

"The audience will be sitting there and rooting for me, I want to play for them, I love the feeling of your own people cheering for you; it gives you a different kind of a boost and motivates you to keep hitting those punches."

Although Kerry is more experienced than Vijender with an impressive record of 23 wins from 30 fights, the Indian is ready to give him a tough time in the ring.

"I don't think fighting Kerry is a problem, sure he might be more experienced but it all depends on the punches and the strength you show in the ring at the time of the fight. The title is mine and I will make sure that everyone is proud of that moment," Vijender said.