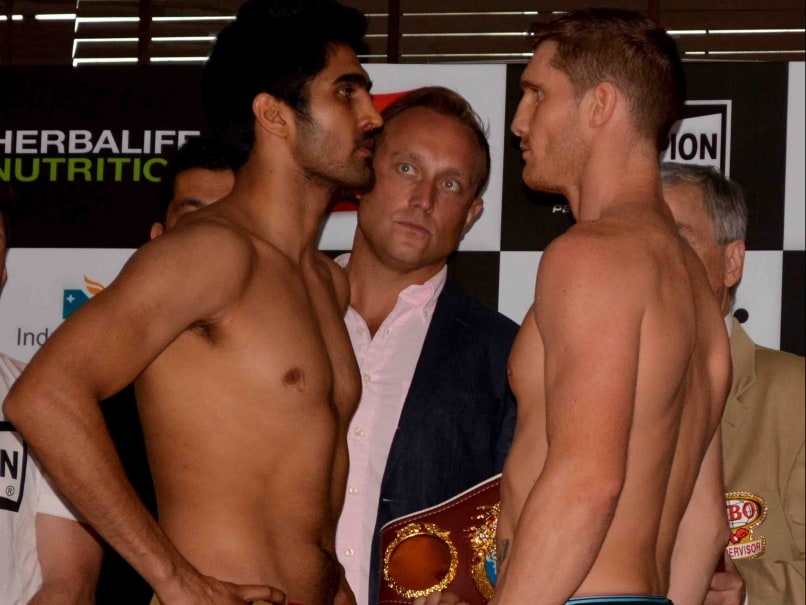 Vijender Singh is hoping to continue his unbeaten record in pro-boxing against Kerry Hope.© NDTV

Undefeated in what has been a fast-rising professional career, Indian boxing star Vijender Singh will take on Welsh-born Australian Kerry Hope in his maiden title bout for the vacant WBO Asia Pacific super middleweight belt in New Delhi on Saturday.

The 30-year-old Indian, who has won all his six pro bouts after turning pro via knockouts, will be up against his most experienced and accomplished rival so far as Hope is a former WBCC European champion with 23-7 win-loss record.

"I can't wait for tomorrow. I am fighting in Delhi after six years, Commonwealth Games being the last time and I am very excited about it," said Vijender after the official weigh-in and face off with Kerry.

None of Vijender's opponents so far have quite matched up to him but Hope promises to be a tough customer.

"I have trained very hard and I can see that he hasn't. So I am very confident," Hope, who weighed 74.9kg, said.

"We will see tomorrow night," came Vijender's reply as he refused to be drawn into a verbal spat before the fight. The Indian came in at 75.7kg in the official weigh in.

The fight night on Saturday will feature seven other undercard bouts, comprising boxers from the Indian Boxing Council's stable and two Thai invites. One of the seven fights will be a women's exhibition bout, featuring boxers from the celebrated MC Mary Kom's academy.

An august gathering of sporting legends, politicians and Bollywood celebrities will be in full attendance at the Thyagaraj stadium which is expected to draw a sizeable number of fans as well.

The stars of Bollywood that will add to the glam quotient of the event are Irfan Khan, Randeep Hooda, Neha Dhupia, Diljit Dosanjh, Rannvijay, Baadshah, Jimmy Shergil and Raghu, among others.

Should he win tomorrow, Vijender would get a crack at the top-15 of WBO world rankings.

"It will open the door for world title bouts, so that would be a progession for me," said Vijender.

"This bout will open the doors to bigger things in life," added Hope.

The crowd will be a factor for both the boxers. While Vijender would look for inspiration, Hope said he would draw from the hostility.

"Let them cheer all they want, he is not winning," Hope said, a statement which only drew a grin from the composed Indian, who hardly ever lets emotion show on his face.