Tyson Fury, who won the WBA world championship after defeating Wladimir Klitschko, has claimed he suffered from dehydration in the ring as he feared that his water could be drugged. 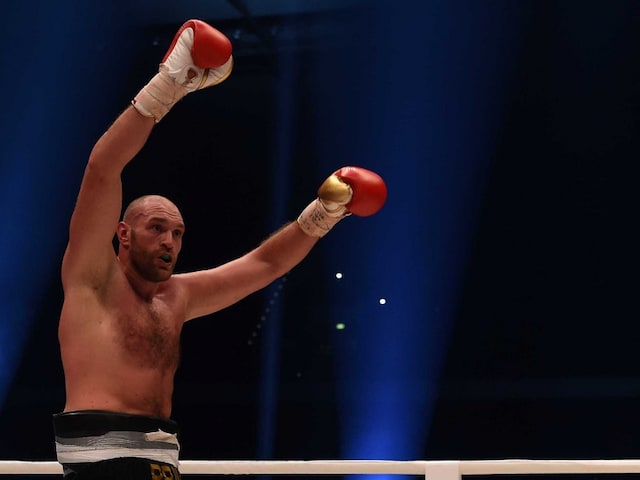 Tyson Fury was worried that Wladimir Klitschko's team would drug his water in order to discredit him and that is why he did not drink a single drop during the bout, resulting in dehydration.© AFP

English underdog Fury stunned Klitschko in Dusseldorf on Saturday to win the WBA, IBF and WBO belts with a clear points victory.

But the 27-year-old, speaking at a press conference in Bolton on Monday, revealed he was so paranoid about potentially underhand tactics he refused to drink water on fight night unless he had bought it himself for fear of being doped.

"I had good information from good resources not to touch anything in the changing rooms because they might try and drug you," Fury told reporters.

"Someone tried to pass me water, and unless it was sealed and contained from my own baggage, there was no chance.

"I went home dehydrated before I even touched anything. I was so frightened of being drug tested and failing the drugs test. I didn't want to take drinks or food from anyone."

Fury said he had already encountered evidence of gamesmanship from Klitschko's team during the bout.

"They tried it with the gloves, and gave me the wrong gloves in the end. They weren't the same gloves I agreed," he added.

"Then they put six inches of memory foam all over the ring and there was a big argument, the fight was nearly off.

"Then he had his bandages and wraps on before we came into the changing room. So he had to take them off."

Meanwhile, Fury has told world heavyweight title rival Deontay Wilder to wait his turn if he wants a shot at the unified champion.

Klitschko has the option of a rematch and Fury has no problem giving the 39-year-old veteran his chance.

That would put a potential unification bout with WBC champion Wilder on the backburner.

"Why do we need to mention Deontay Wilder?" Fury asked. "Let's laugh at his name, shall we?

"Wladimir Klitschko was the number one in the division. Probably the pound-for-pound king, whatever that means. This man has been on top of the world and reigned for nine years.

"With Floyd Mayweather gone, Wlad took his place and I just took him out. So why would I be bothered about a novice like Wilder?

"He's a basketball player who took up boxing a couple of years ago. I'm a true natural fighter. I've been doing it all my life.

"So, if Deontay Wilder wants a unification fight he is going to have to wait, because Wladimir Klitschko has a round two....ding ding ding!"