The momentum is certainly lost: Vijender Singh on Indian boxing

Indian boxing is going through one of its toughest phases with national Federation being in suspension for a year now. The International Boxing Association has, in fact, threatened to bar Indian boxers from all competitions if the IBF fails to hold a re-election latest by December first week. 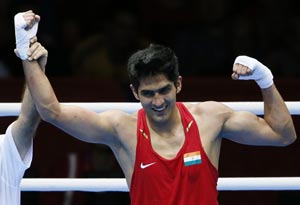 The momentum is certainly lost and an opportunity seems to have been missed, feels the poster boy of Indian boxing Vijender Singh as he lamented the sport's rather poor growth despite the euphoria that was generated by his historic bronze medal at the 2008 Olympics.

Speaking to PTI before leaving today for the World Championship starting October 14 in Almaty, Kazakhstan, Vijender said the buzz is certainly missing.

The first Indian boxer to grab medals at the Olympics and the World Championship, the former middle-weight number one rued the "missed opportunities".

"It is true, the buzz is not there. When I went for the World Championship in 2009, Milan, there was so much enthusiasm. We all could feel how much we had gained at that time. It is quite apparent now that the momentum has been lost," said the 27-year-old when asked what he thought of the situation Indian boxing is in right now.

"I feel, it is a case of missed opportunities. Given the high we attained after Beijing, we should have been doing better," he added.

Indian boxing is going through one of its toughest phases with national Federation being in suspension for a year now. The International Boxing Association has, in fact, threatened to bar Indian boxers from all competitions if the IBF fails to hold a re-election latest by December first week.

Vijender chose to steer clear of that issue but did highlight the fact that a lot more could have been done to promote the sport and help it grow.

"I am not going to make any comment on the Federation, I will only say that boxing could have been a huge sport in India. I feel we didn't get as many sponsors as we should have got given the achievements of our boys. We delivered on the performance front but that was not exactly cashed in on," he explained.

"We needed to be more dynamic in marketing the sport and making it popular. Look how it's done in USA and UK, it's not very tough. The platform was there after Beijing but we did not do as well as we should have done on that front," Vijender said.

"I think (Brig) Muralidharan Raja (the Federation's previous Secretary General) was very dynamic in his functioning. We need people like him to promote boxing, he was doing very well," he added.

Vijender is all set to compete in his fourth World Championship, a feat achieved by only a few boxers.

Talking about his longevity in the injury-prone sport, Vijender said, "I am worried about injury because at this World Championship, we would be competing without headguards.

"I have worked really hard to be around for this long because ours is sport in which you will get thrashed whether you win or lose. It's tough to maintain fitness, weight but I have managed to do it with some luck and loads of hard work," he added.

Asked to reflect on his journey so far, Vijender said, "I have made mistakes in life like everybody else and learnt from them. I try to keep my focus as best as I can and completely shut myself off at the start of tournaments."