Sarita Devi has been provisionally suspended for refusing to accept her bronze medal owing to a controversial semifinal loss at Incheon Asian Games. The suspension has jeopardised her chances of participating in the World Championships from November 19 in Jeju Islands, Korea. 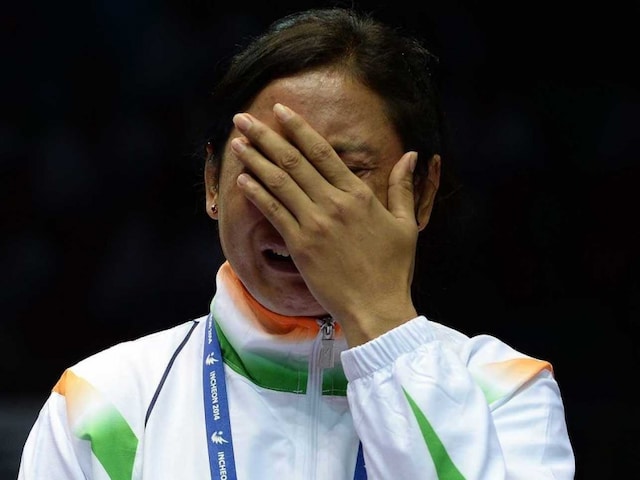 The Sports Ministry on Monday asked the newly formed Boxing India (BI) to work towards revocation of provisional suspension imposed by AIBA on L Sarita Devi and three ringside coaches by helping them in filing their replies to the world body.

Sarita has been provisionally suspended for refusing to accept her bronze medal owing to a controversial semifinal loss at Incheon Asian Games. The suspension has jeopardised her chances of participating in the World Championships from November 19 in Jeju Islands, Korea. (Also read: I am Sorry, Won't Do it Again, Sarita to AIBA)

AIBA's strict view of her protest on the podium prompted the Sports Ministry, Indian Olympic Association and BI to hold a meeting to chart out a future course of action.

The meeting was attended by Sports Secretary Ajit Sharan, IOA President N Ramachandran and Secretary General Rajeev Mehta, AIBA representative from India Kishen Narsi, Sandhu and Sandeep Jajodia, the president of BI, which is yet to get recognition from the government as well as the IOA.

At the meeting, Sports Secretary Sharan asked the BI to prepare the replies of the boxer and the coaches and ensure that the provisional suspension on them were revoked at the earliest.

"The Sports Secretary took stock of the situation. He asked BI to prepare the replies of Sarita Devi and the coaches to present a collective stand before the AIBA. The sports secretary has assured all necessary help to Sarita and the coaches to ensure that the ban is revoked at the earliest," Sports Authority of India Executive Director (Teams) Sudhir Setia said at a media briefing.

Setia also said that Sarita and the coaches would not be filing for appeals to AIBA but sending their replies to the letter of provisional suspension sent to them.

"They are filing their replies as required under the AIBA letter of provisional suspension. It cannot be an appeal as the suspensions are yet to be ratified. The boxer and the coaches are sending their replies separately," he said.

Asked if the government would advise going to Court of Arbitration for Sports in Lausanne if the AIBA refuses to hear India's plea for reconsideration of the provisional suspension, Setia said, "It is pre-mature to think about CAS. What we are doing is the logical first step."