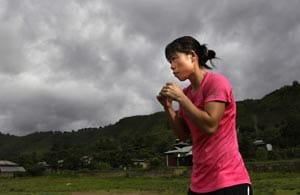 Announcing this during a reception of Kom at Churachandpur district headquarters, Manipur health minister T Phungzathang, who was the chief guest, said the government had decided to name the road connecting Churachandpur town to the office of the deputy commissioner's office as 'Mary Kom Ring Road'.

Phungzathang said the government would also sanction Rs 10 lakh from the Department of the District Rural Development Agency to construct a gallery at the Churachandpur Public Ground in the name of the ace boxer.

Kom hails from Churachandpur district, though she stays at her official residence at Langol in the west district of Imphal.