Vijender Singh knocked out his Hungarian opponent Alexander Horvath in the third round for his fourth consecutive professional boxing win. Catch all the highlights here.

Vijender Singh was cautious initially against Alexander Horvath but connected with a couple of solid punches to take the first round. The second round was an evenly-fought affair with the Hungarian's ungainly style keeping Vijender away. But in the third round, the Indian boxer came out swinging and connected with hard blow on his opponent's shoulder, which proved to be enough on Saturday at the Echo Arena in Liverpool, England. Catch all the highlights here. (Vijender Singh's Next Opponent Dines on Snakes' Blood to Attain Supernatural Powers)

23:50 hrs IST: So Vijender's winning run in professional boxing continues!! He didn't really connect well with most of his punches but still got the job done. Four out of four for the Indian.

23:46 hrs IST: And it's over!! Vijender Singh wins his fourth successive pro bout. The Indian boxer connected with a right to Horvath's left shoulder. The Hungarian was visibly hurt and was clutching his shoulder. Horvath failed to meet the referee's count.

23:44 hrs IST: End of Round Two! Vijender is playing the waiting game. His opponent seems have a very ungainly style. The Indian will need to up the ante in the third round.

23:42 hrs IST: Horvath seems to be exhausted already. Vijender will be licking his lips.

23:40 hrs IST: End of the first round. Vijender connected with two seriously hard punches that left his opponent reeling. Great boxing from the Indian!!

23:39 hrs IST: Vijender, though, is waiting patiently and has connected with a couple of hard blows.

23:37 hrs IST: Horvath seems to be the more aggressive of the two. The Hungarian has come out swinging!

23:33 hrs IST: Here comes Vijender with the Bollywood song 'Singh is King' blaring in the background. 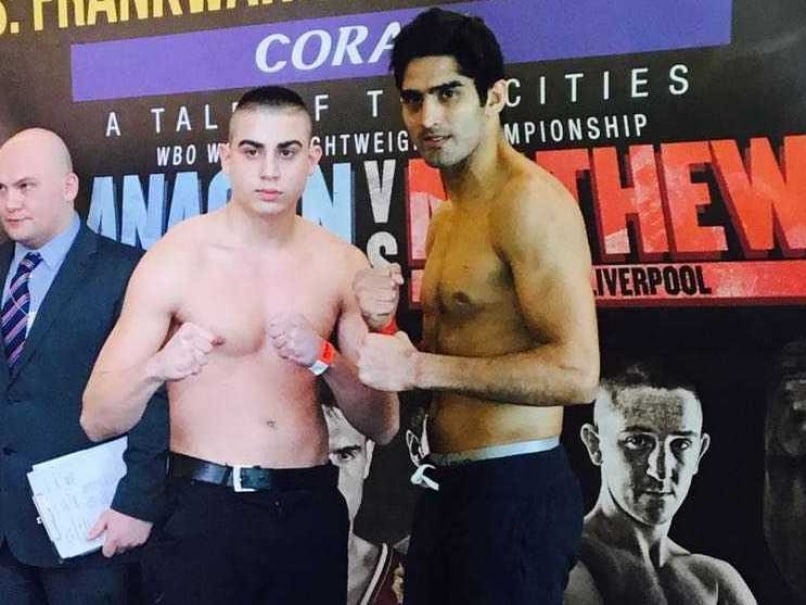 Vijender Singh and Alexander Horvath during the weigh-in ahead of their pro boxing clash.

The Indian fighter, who won his previous three bouts via knockouts, will look to carry on with his winning run against an opponent, who has been on a snake-blood diet. (Vijender Singh Knocks Out Samet Hyuseinov to Complete Hattrick of Wins in Pro Boxing)

Horvath is 10 years younger to Vijender and has five wins from his seven pro boxing fights. Not only that, the 20-year-old Hungarian boxer has been feasting on snake blood to prepare himself for the fight. (Vijender Singh Scripts First Round Knockout Win Over Dean Gillen)

However odd that might sound, but the uncommon ritual has not in the least deterred Vijender from his goal - dishing out a fourth knockout! (Vijender Singh Knocks Out Sonny Whiting to Start Professional Boxing Career With a Bang)

Meanwhile, the Hungarian has not backed down from the trash talk tradition and promised to teach Vijender a thing or two about boxing.

Vijender has not had too much of a test in his three previous fights against Sonny Whiting, Dean Gillen and Samet Hyuseinov.

However, the Hungarian will pose a whole new challenge in the six-round bout, with 31 rounds of fighting experience under his belt.

Comments
Topics mentioned in this article
Vijender Singh Boxing Live Blogs
Get the latest Cricket news, check out the India cricket schedule, Cricket live score . Like us on Facebook or follow us on Twitter for more sports updates. You can also download the NDTV Cricket app for Android or iOS.