Muhammad Ali died on Friday at 74 after health problems complicated by a long battle with Parkinson's disease. On Sunday, family members were expected to accompany his body from Arizona, where he died to his hometown Kentucky 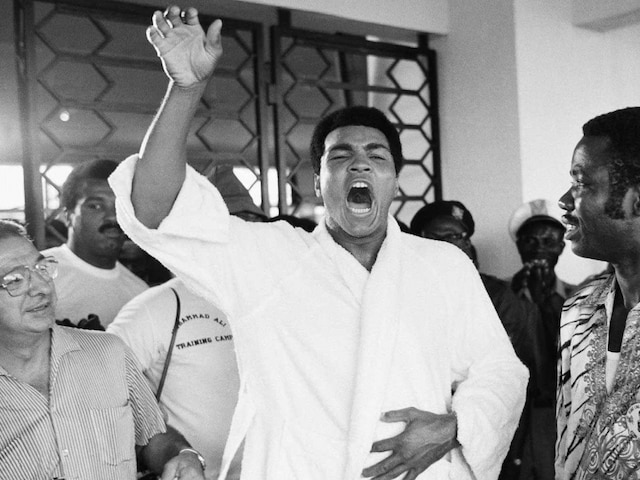 Muhammad Ali was heavyweight champion for a record three times between 1964 and 1978.© AP

The family of boxing legend Muhammad Ali prepared to accompany his body on the journey back to his hometown Louisville, ahead of a public funeral procession and service expected to draw huge crowds in honor of "The Greatest."

Former president Bill Clinton and comedian Billy Crystal are among those due to speak Friday at a memorial in a huge arena in the Kentucky city where Ali - a three-time world heavyweight champion - grew up and threw his first punches.

The charismatic Ali, a dazzling fighter and outspoken civil rights activist who became one of the 20th century's most towering figures, died on Friday at age 74 after health problems complicated by a long battle with Parkinson's disease.

On Sunday, family members were expected to accompany his body from Arizona, where he died, to his home state in the southern United States.

"Our hearts are literally hurting. But we are happy daddy is free now," one of Ali's nine children, daughter Hana, wrote on Twitter.

Louisville Mayor Greg Fischer told AFP that the city --whose residents have left flowers, balloons and tributes at Ali's childhood home -- was ready for a massive celebration to honor its most famous son.

"The Champ was a supernatural figure who crossed all kinds of boundaries, from athletics to arts, to humanitarian activities, from black to white, from Christians to Islam, and he belongs to the world," Fischer said.

"There will be people coming from all over."

The mayor said plans for Ali's last farewell had been in the works for "quite some time," and that the city -- host of horse racing's elite Kentucky Derby, which draws crowds of nearly 200,000 -- was set to "handle big crowds."

After a small family funeral on Thursday, Ali's coffin will be transported Friday through the streets of Louisville, before a private burial and the public interfaith memorial service at the KFC Yum! Center.

The procession has been organized to "allow anyone that is there from the world to say goodbye," family spokesman Bob Gunnell told reporters.

Later Sunday, interfaith services were planned at Louisville's Islamic Center, which invited citizens to "join hands in unity to celebrate the life" of Ali.

The official cause of Ali's death was septic shock due to unspecified natural causes.

Gunnell said Ali had sought medical attention for a cough, but his condition rapidly deteriorated. He was admitted to a hospital in the Phoenix suburb of Scottsdale, where he had lived for several years with his wife Lonnie.

"We all tried to stay strong and whispered in his ear, 'You can go now. We will be okay,'" Hana Ali wrote.

"His fight outside the ring would cost him his title and his public standing. It would earn him enemies on the left and the right, make him reviled and nearly send him to jail. But Ali stood his ground."

Tributes for Ali - who converted to Islam in the 1960s - even came from Iran, where Foreign Minister Mohammad Javad Zarif called him "#TheGreatest in the ring and in the fight for justice, dignity and peace."

Ali's career stretched from 1960 to 1981 and he retired with a record of 56-5, including such historic bouts as the "Rumble in the Jungle" against George Foreman in 1974 in Kinshasa, capital of the Democratic Republic of Congo (formerly Zaire).

"He hit me with a quick one-two, knocked me down to the canvas and my whole life changed," Foreman told CNN of the epic "Rumble."

"I was devastated," he said. "Little did I know I would make the best friend I ever had in my life."

Other defining moments of Ali's career included two knockouts of Sonny Liston and his rivalry with Joe Frazier.

Ali -- born Cassius Marcellus Clay Jr on January 17, 1942 -- dazzled fans with slick moves in the ring and his wit and engaging persona outside it.

He took the name of Muhammad Ali after converting to Islam in 1964, soon after he had stunned the sport by claiming the world title with a monumental upset of Liston.

Ali's refusal to serve in the Vietnam War saw him prosecuted for draft evasion, and led to him being effectively banned for boxing for three years of his prime. The US Supreme Court overturned his conviction for draft dodging in 1971.

Ali held firm to his beliefs and eventually earned accolades as a civil rights activist.

He received the highest US civilian honor, the Presidential Medal of Freedom, in 2005 and was chosen to light the Olympic torch in 1996, his hands trembling due to Parkinson's -- a poignant moment for the sports world.

Ali will be buried at Cave Hill Cemetery in Louisville.