Muhammad Ali will be celebrated with a public funeral procession and memorial service on Friday in his home town of Louisville, Kentucky, a family spokesman said 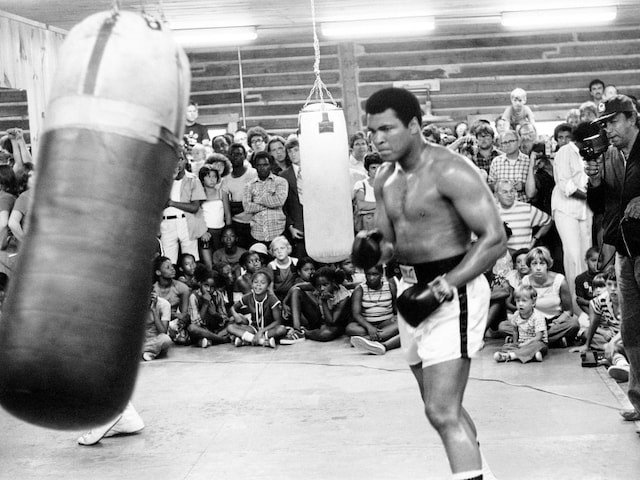 Muhammad Ali was heavyweight champion for a record three times between 1964 and 1978.© Reuters

The life of late legendary boxer Muhammad Ali will be celebrated with a public funeral procession and memorial service next week in his home town of Louisville, Kentucky, a family spokesman said.

Ali, the three-time world heavyweight champion and colorful civil rights activist whose fame transcended the world of sports and made him an iconic figure of the 20th century, died on Friday at 74 after a long battle with Parkinson's disease.

The dazzling fighter - whose words, often delivered in catchy rhymes, were as devastating as his punches - had been admitted to an Arizona hospital earlier in the week.

From political leaders to sports figures to Hollywood's A-list, the world paused to remember "The Greatest," whose remarkable career spanned three decades, and whose battle with illness later in life moved his fans.

After a private family funeral on Thursday, Ali's coffin will move through the streets of Louisville on Friday, June 10, before a public memorial service at an arena, with former president Bill Clinton among those expected to offer eulogies.

The procession has been organized to "allow anyone that is there from the world to say goodbye," family spokesman Bob Gunnell told reporters in Scottsdale, Arizona.

Louisville lowered flags to half-staff in his honor, as fans flocked to his modest childhood home, now a museum, to pay their respects and leave flowers.

'He did not suffer'

President Barack Obama led tributes for Ali, issuing an unusually personal statement in which he said he keeps a pair of Ali's boxing gloves and a photo in his private study.

"Muhammad Ali was The Greatest. Period," the US president said, hailing Ali for his integrity and saying he "stood up when it was hard; spoke out when others wouldn't."

"His fight outside the ring would cost him his title and his public standing. It would earn him enemies on the left and the right, make him reviled and nearly send him to jail. But Ali stood his ground," Obama said.

"And his victory helped us get used to the America we recognize today."

Obama later called Ali's widow Lonnie, telling her "how special it was to have witnessed 'The Champ' change the arc of history," deputy White House spokeswoman Jennifer Friedman said.

In a possible preview of Bill Clinton's eulogy, he and his wife Hillary, who is seeking the Democratic nomination for the White House, said Ali was "a blend of beauty and grace, speed and strength that may never be matched again."

Ali was hospitalized in the Phoenix area early this week, but his condition quickly deteriorated, and his family came to his bedside.

"His final hours were spent with just immediate family," Gunnell said, noting the official cause of death was septic shock due to unspecified natural causes.

"He did not suffer."

Ali had been living in the Phoenix area with Lonnie. His fourth marriage, it was officiated in 1986. He was survived by nine children -- seven daughters and two sons.

The fighter himself planned much of the memorial events, Gunnell said.

The interfaith service is to be conducted at Louisville's KFC Yum! Center in accordance with "Muslim tradition" and in the presence of an imam. Comedian Billy Crystal and sports journalist Bryant Gumbel are also expected to speak.

Ali is to be buried at Cave Hill Cemetery in his native Louisville, where he was born in 1942. His body was to brought home in the next two days.

Outside the family home in Louisville and the hospital in Scottsdale, fans left flowers, letters and mementos in Ali's honor.

"He just represents everything that was good about mankind and it's sad to see him go," said James Brice.

Fans also gathered in Los Angeles to snap photos and leave flowers at Ali's star on the Hollywood Walk of Fame.

Ali had been hospitalized multiple times in recent years.

In 2014, he was treated for a mild case of pneumonia and in 2015 for a urinary tract infection.

His Parkinson's, thought to be linked to the thousands of punches he took during a career studded by bruising battles inside the ropes, had limited his public speaking, but he continued to make appearances and statements via his entourage.

'The greatest of all times'

Ali's career, which stretched from 1960 to 1981 and saw him retire with a record of 56-5, included such historic bouts as the "Rumble in the Jungle" against George Foreman.

Don King promoted that watershed bout in Kinshasa, Zaire, in 1974, in which Ali used his "Rope a Dope" strategy to best Foreman and become just the second fighter ever to regain the heavyweight world title.

"His spirit will go on forever," King said of Ali. "He represents what every athlete and sports person tries to do, an attitude of getting it done, success, he was fabulous."

Other defining moments of Ali's career included two knockouts of Sonny Liston and his thrilling rivalry with Joe Frazier -- which saw the two men slug it out in the ring and verbally spar outside of it.

"He hit me with a quick one-two, knocked me down to the canvas and my whole life changed," Foreman told CNN of the epic "Rumble."

"I was devastated," he said. "Little did I know I would make the best friend I ever had in my life."

Ali -- born Cassius Marcellus Clay Jr in Louisville on January 17, 1942 -- dazzled fans with slick moves in the ring, and with his wit and engaging persona outside it.

He famously said he could he "float like a butterfly, sting like a bee" in the ring.

The fighter took the name of Muhammad Ali after converting to Islam in 1964, soon after he had stunned the sport by claiming the title with a monumental upset of Liston.

He was vilified in some quarters for that conversion and his outspoken stance on Vietnam and civil rights issues.

Ali's refusal to serve in the Vietnam War saw him prosecuted for draft evasion, and led to him being effectively banned for boxing for three years of his prime, but the US Supreme Court overturned his conviction for draft dodging in 1971.

But he held firm to his beliefs and eventually earned accolades as an activist.

Ali received the highest US civilian honor, the Presidential Medal of Freedom, in 2005.

He represented the United Nations as a messenger of peace and was chosen to light the Olympic torch in 1996, his hands trembling due to Parkinson's -- a poignant moment for the sports world.

Celebrities, politicians, reporters who covered him, athletes and of course boxers praised Ali for his superb work in and out of the ring.

Floyd Mayweather, who retired from boxing last year with a perfect 49-0 record, recalled the awe he felt in meeting Ali in 1996, when he was a US Olympian.

"I didn't really know what to say. I couldn't believe it," Mayweather said. "I didn't even want to show my true feelings and emotions of how I felt."

Twenty years on, Mayweather was clear on his view of Ali's legacy -- forged inside and outside the ring.

Mayweather's great rival Manny Pacquiao of the Philippines said the world had lost "a giant."