After the winning the 51kg boxing trial, Mary Kom revealed why she didn't shake hands with her opponent Nikhat Zareen. 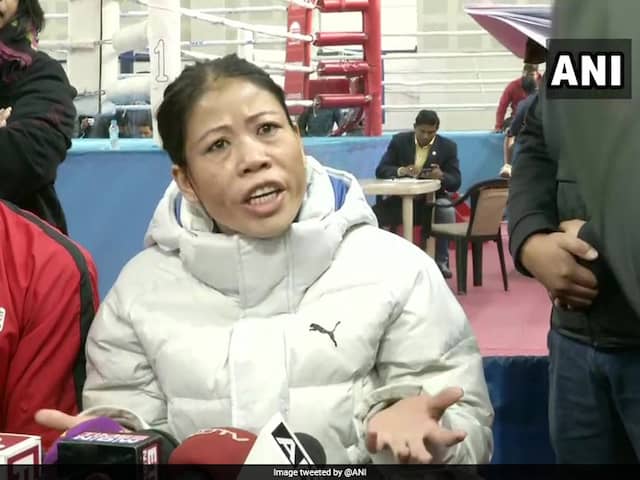 Mary Kom said if Nikhat Zareen wants others to respect her then then "she should first respect others".© ANI Twitter

Mary Kom booked her berth in the Indian team for the 2020 Olympic qualifiers slated to be held in Wuhan, China after getting the better of Nikhat Zareen in the final of 51kg women's boxing trial on Saturday. There was a lot of spotlight going into the Mary Kom vs Nikhat Zareen women's boxing trials bout after the latter made a public demand for a fair Olympic selection trial. In the final, Mary Kom came out trumps, winning the bout by a split 9-1 verdict. However, video of Mary Kom's reaction after the bout started doing the rounds on Twitter, where the six-time world champion can be seen marching past her opponent and not shaking her hands.

Mary Kom defeated Nikhat Zareen to book her spot in the Olympic qualifiers.

After the bout, Mary Kom revealed why she didn't shake hands with Nikhat Zareen.

"Why should I shake hands with her? If she want others to respect her then she should first respect others. I don't like people with such nature. Just prove your point inside the ring, not outside," she was quoted as saying by ANI.

On the other hand, Nikhat Zareen said she was hurt by Mary Kom's behaviour and accused her of using "foul language" inside the ring.

Mary Kom on not shaking hands with Nikhat Zareen after the bout: Why should I shake hands with her? If she want others to respect her then she should first respect others. I don't like people with such nature.Just prove your point inside the ring,not outside. https://t.co/TERXuRECMh pic.twitter.com/vwqSvSmgN3

According to a report in news agency PTI, a few representatives from from Nikhat Zareen's home state Telangana's boxing association cried foul once the result was declared. Boxing Federation of India (BFI) President Ajay Singh had to step in to control the situation after AP Reddy, claiming to represent the Telangana Boxing Association vociferously protested the decision.

"How will boxing grow amid this kind of politics," he later told reporters after being asked to leave the ringside by Ajay Singh and pacified by a disappointed Zareen herself.

Also making the India squad for next year's Olympic qualifiers was Lovlina Borgohain, who beat Lalita in the 69kg final.

Comments
Topics mentioned in this article
Mary Kom Boxing
Get the latest updates on IPL 2020, check out the IPL Schedule for 2020 and Indian Premier League (IPL) Cricket live score . Like us on Facebook or follow us on Twitter for more sports updates. You can also download the NDTV Cricket app for Android or iOS.